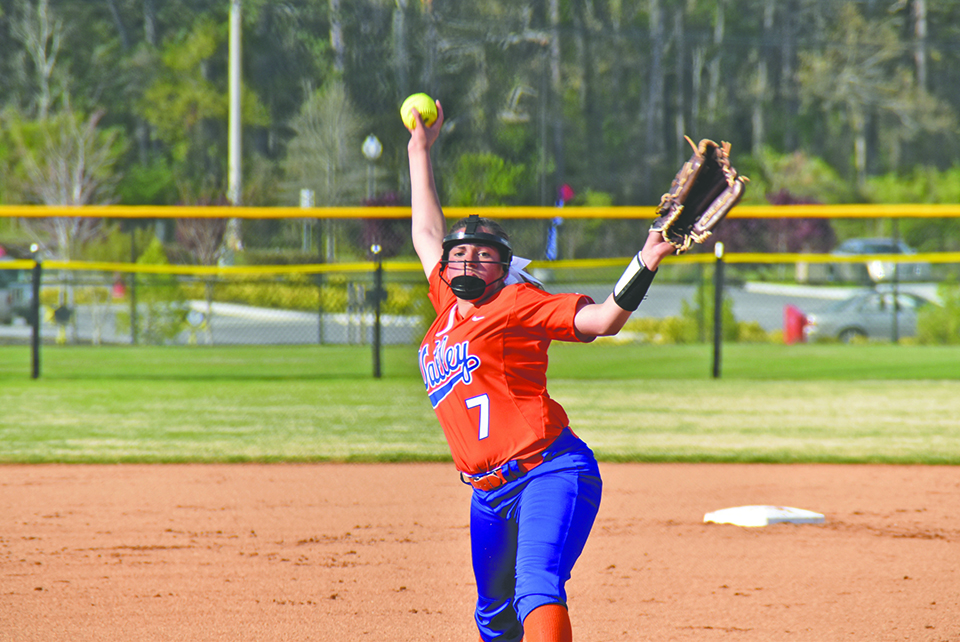 Valley High School freshman pitcher K.K. Green winds up a pitch during a game this past season for the Rams. [FILE PHOTO]

TROY — The South Central Regional is where Valley High School’s season ended in the double-elimination bracket.

The Valley Rams opened play against Demopolis in a low-scoring matchup. Demopolis scored the lone two runs of the game on a Rams error in the bottom of the sixth inning. There were only eight combined hits between the two schools.

The Rams had five hits, led by seventh-grader Alyssa Burrows, who had two hits in the morning matchup.

“I could not have been prouder,” Valley head coach Torie Hopkins said of her team’s performance. “They played with a lot of heart, a lot of soul, and a lot of fight.”

There were a few instances where bases were loaded for Valley, but the Rams just couldn’t capitalize on the opportunities in the loss to Demopolis, Hopkins said.

The Rams returned to action later that day to face off against Jemison, a matchup that had a different tempo from the start. Both Jemison and Valley brought in two runs in the first inning, but Jemison pitcher Kennise Bolton shut out the Rams the rest of the way to secure a 6-2 victory for Jemison.

“They pitched some lefties that we just couldn’t adjust to,” Hopkins said. “They just hit the ball. They were a good hitting team, Jemison was very tough. They’re probably one of the toughest teams that we’ve played.”

Jemison made it through the South Central Regional and now heads to the state tournament.

Valley now looks forward to team tryouts next Monday, May 21, after school before setting up the offseason schedule.

Effort and energy were two positives that Hopkins enthusiastically took from the 2018 season. Losing only three seniors this month to graduation, Hopkins is optimistic about moving forward in the program with Burrows and freshman pitcher K.K. Green.

“I’m very proud of their hard work and dedication,” Hopkins said. “They fought in times when they needed to and they stood behind their pitcher [Green]. She truly was our No. 1 the entire season. She pitched 90 percent of our games and never complained.”