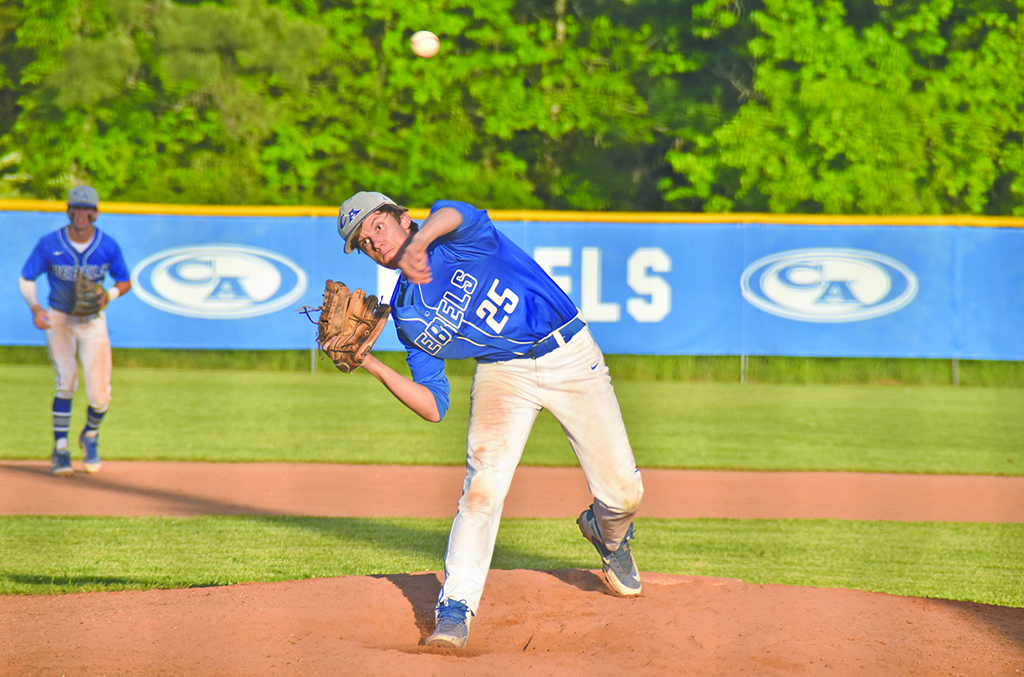 Chambers Academy sophomore pitcher Caydon Smoot settled down after a rocky start in the second installment of Wednesday’s AISA state semifinals doubleheader against Jackson Academy. He allowed five runs in the first two innings but held the Eagles scoreless over the next three frames. He also contributed at the plate. (Photo by Sam Chandler)

After dropping game one of Wednesday’s doubleheader against Jackson Academy, 9-7, the Rebels had to win game two in order to stave off elimination from the AISA Class A state playoffs.

So that’s what they did.

Down to their the final three outs and trailing by one, the Rebels plated three runs in the top of the seventh inning to take a decisive lead.

Braxton Allen lofted a sacrifice fly with the bases loaded to even the score, 8-8. Chambers Academy’s next batter, Blake Sheppard, then came through with the hit of the night.

The senior rapped a double down the left field line that sent teammates Brody Smoot and Caydon Smoot scampering across home plate.

“I just knew that it was all on the line, and I had to step up big,” Sheppard said. “I had a lot of confidence going to the plate, and it paid off.”

The Rebels’ 10-8 lead held in the bottom half of the frame, as Luke Davis, Caydon Smoot and Payton Allen combined to retire the side.

Chambers Academy (18-12) will host Jackson Academy in the state semifinal series’ finale tomorrow at 3 p.m. (CDT). On the line will be a trip to the state championship.

“We’ve got all the momentum in the world right now, and I’m just so dadgum proud of these kids,” head coach Dillon NesSmith said. “It’s been a fun year, but we ain’t done yet.”

Chambers Academy dug an early hole. Then, it created a crater. Rebels ace Gavin White surrendered two runs in the opening inning and five more in the third as his team fell behind, 7-0.

White struggled with command, allowing several walks, and his defense faltered behind him. The Rebels committed multiple errors on tricky infield choppers.

Jackson Academy capitalized on the mistakes.

The Eagles strung together sacrifice groundouts and timely hits with runners in scoring position as they built a sizeable lead.

But Chambers Academy chipped away at the deficit.

Davis lifted an RBI single to right field in the bottom of the third inning to put his team on the scoreboard. The Rebels tacked on another run in the fifth when Caydon Smoot scored on a passed ball.

After Jackson Academy re-extended its lead to seven, 9-2, in the sixth, Chambers Academy answered with a surge of its own.

The Rebels plated three runs in the bottom of the frame.

Jordan Gillespie started the inning with a stand-up triple, and he later scored on a hard-hit ball off the bat of Payton Allen. Caydon Smoot and White also helped plate runs.

Chambers Academy trailed, 9-5, heading into the seventh. It didn’t go down without a fight.

Caydon Smoot delivered a two-RBI single with two outs and the bases loaded to make it 9-7.  But that’s as close as the Rebels came.

White grounded out to with runners on first and second to end the game.

“We had one bad inning in the first game,” NesSmith said of the second inning. “That was definitely our big downfall.”

Chambers Academy experienced another inauspicious start. But this time, the Rebels were able to overcome it.

The Rebels trailed 5-1 entering the third. Then, their bats roared to life.

White and Braxton Allen started the frame with consecutive singles to right field. Following a Blake Sheppard walk that loaded the bases, Gillespie crushed a two-run double to the left field fence.

Later in the inning, Brody Smoot and Caydon Smoot drew back-to-back walks with the bases loaded. Their plate discipline enabled Chambers Academy to knot the score, 5-5.

That’s where it stayed until the fifth.

The Rebels loaded the bases with no outs after Payton Allen walked, Brody Smoot got hit by a pitch and Caydon Smoot reached on an error.

Chambers Academy led, 7-5, with two innings to play. But the game was far from over.

Jackson Academy scored three runs in the sixth to take an 8-7 lead. Before the Eagles batted, White replaced Caydon Smoot on the mound. He faced only two batters before Davis relieved him.

Chambers Academy loaded the bases on a pair of walks and a hit batter. Allen and Sheppard then came through in the clutch.

The winning hit proved a perfect present for Sheppard, who celebrated his 18th birthday on Wednesday.

“Whenever we get down, we’ve always done good at just fighting back,” he said. “I think that’s what makes us special, and I think that’s going to take us to the championship.”