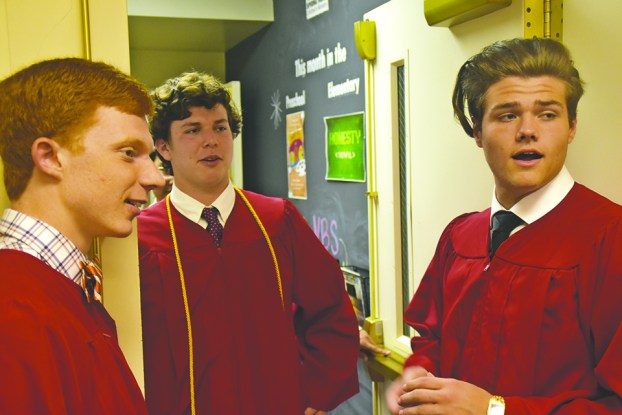 Harrison Spivey (center) speaks with a couple of classmates before lining up for Baccaluarate at Spring Road Christian Church on Thursday evening.

LANETT — Harrison Spivey is graduating from Springwood School tonight after finishing up his baseball, football and track & field careers for the Wildcats. The student-athlete will also walk across the stage with a 3.96 GPA, which finishes for the fourth-best in his class but tonight’s celebration almost never happened for him.

Spivey dropped off his little sister in his 2007 Ford F-250 when he was on his way to take a noon exam at Springwood on Wednesday.

“I was going around the curb because the road was wet since it’s been raining the last three or four days now,” Spivey said. “Then, I ran off the road and when I came back on I had no control over it. I just went in a ditch and hit a tree. I totaled my truck. If my sister would’ve been there, she would’ve been flattened in the passenger’s seat.”

Spivey walked away from the accident with only a few scratches. On Thursday afternoon, shortly before he joined his classmates at Baccalaureate inside of Spring
Road Christian Church, Spivey said that he was told he might’ve suffered a mild concussion in the accident but he doubted it. He dealt with general soreness, similar to the soreness he experienced on Saturdays after football games, on Thursday but his main concern was the mental trauma he’d suffered.

“That was definitely the hardest part, knowing that I could’ve killed my sister so easily,” Spivey said. “But I wasn’t even worrying about myself. Looking at the car, if my sister was in the car, she would’ve been dead. It was very shocking to watch. I was in shock for so long, I don’t know, my adrenaline was running the whole time.”

His friends and family reacted with hugs and repeatedly asked him if he was okay but Spivey admitted that he wasn’t as emotional as everyone else was in the process.

“All of my sisters came and they were crying, flipping out,” Spivey said. “My friends and I were just picking stuff out of the truck, cleaning up the mess.”

Spivey came to Springwood his fifth grade year and has grown close to all of his classmates since. Once he returned to school, they all checked on him to make sure he was still alive and okay, he said.

On the football team, Spivey played center and defensive tackle. Two of his favorite highlights on the gridiron was scoring a 75-yard touchdown his freshman year and flipping a Lee-Scott middle linebacker on the field during the homecoming game his sophomore year. Spivey participated in the shot put event on the track & field team and he played catcher and first base on the diamond for the Wildcats.

He now heads to Auburn University to major in pre-health and pre-med, where he’ll have to make the adjustment of playing no team sports. For now, the departing Wildcat wants the Springwood underclassmen to remember him as a person above all things.

“I want more of how I made people feel, the respectfulness and who I was as an individual,” he said. “Not really just how smart I was or how good I was at sports. I want to have made an impact. Maybe I made somebody feel good that day or I maybe I became their friend that day. That’s what I want people to remember.”

Tri-sport athlete graduates Chambers with a 4.0

LaFAYETTE — Blake Sheppard is leaving Chambers Academy with a full resume. Sheppard was on the Rebels baseball, football and... read more