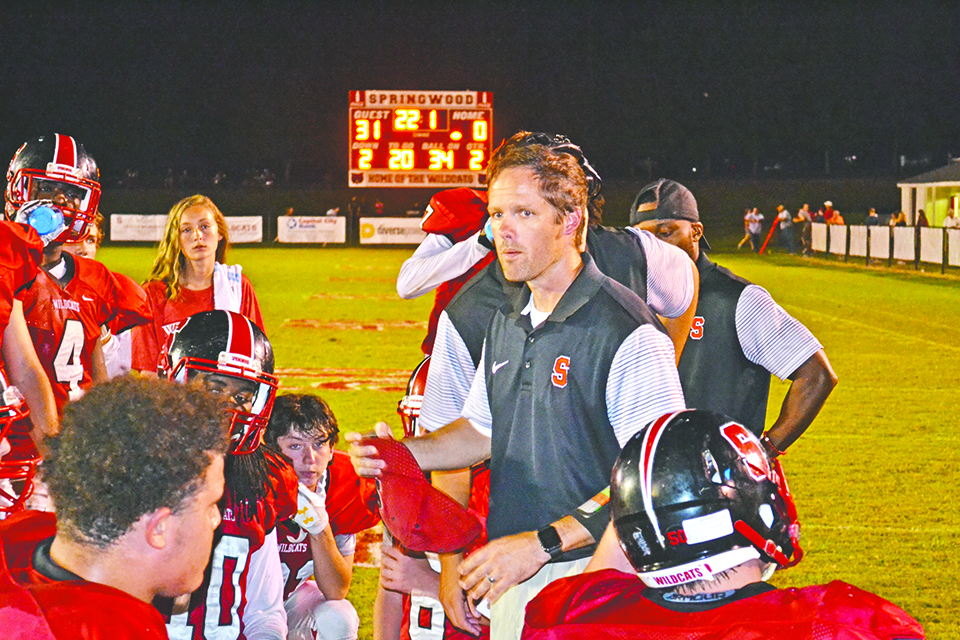 Springwood Wildcats head coach Thomas Hill speaks to his team on the sidelines during a game in the 2017 season.

LANETT — The Springwood Wildcats are ready to pounce on the school’s recent reclassification.

Back in March, the Alabama Independent School Association dropped Springwood School from Class AAA to Class AA for the academic years 2018-2020. The Wildcats have been in Class AAA for the past two seasons.

“Our kids are really excited, especially playing AA ball,” Springwood head football coach Thomas Hill said. “We’ve gone against the biggest and baddest in AAA ball, it’s been like being in the SEC West the last couple of years for us.”

The Class AAA region that Springwood previously played in featured well-regarded programs such as Bessemer Academy, Tuscaloosa Academy, Lee-Scott Academy and Glenwood School. The Wildcats went 2-8 in region games in the two-year stretch that the program was in Class AAA.

Last Thursday, after approximately a week of practice, the Wildcats held an open intrasquad scrimmage. The Red team defeated the White, 19-6.

“It was a little sloppy,” Hill said.

With the scrimmage came a plethora of turnovers, as newer players were given more reps after last season’s returning starters were split evenly amongst the Red and White teams. Hill noted that last year’s scrimmage was also sloppy and the last clean spring game came in 2016 when the Wildcats were returning a handful of players.

“We made some good plays,” Hill said of this year’s exhibition. “In the end, it went okay. We had fun, it was competitive.”

Wildcats star running back and rising sophomore O.J. Tolbert suffered a broken ankle on the first offensive play of the scrimmage.

Tolbert nearly rushed for 900 yards last season as a freshman, even after missing three games. He is expected to be out for six weeks with his latest injury. Freshman Ethan Plank and sophomore Kannon Key are next in line for Wildcat running backs on the team’s depth chart.

Defensively, the Wildcats have traditionally put eight players in the box with a 3-5 scheme, which will be led by senior middle linebacker Mitchum Smith, who is returning from a broken leg suffered last season, as well as Craft, Leva and Ramseur, who are expected to see some snaps on both sides of the ball this year.

This season, the team expects similar results from those two years.

“This year, making the playoffs is a definite goal,” Hill said. “I think they’re hoping to go further than that. Those are the goals and expectations of this group.”