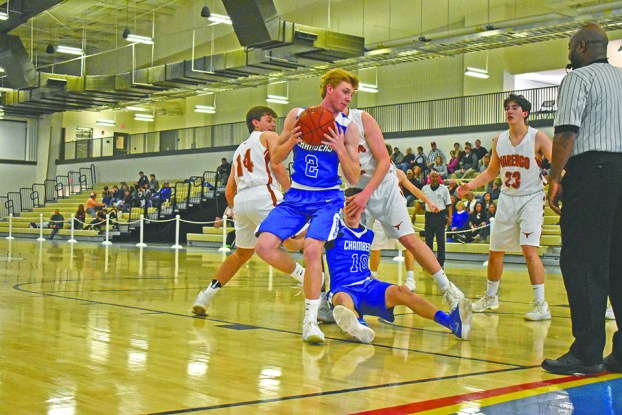 Tri-sport athlete graduates Chambers with a 4.0

Sheppard was on the Rebels baseball, football and basketball teams, all while maintaining a 4.0 GPA. This past academic year was perhaps the most successful in school history for athletics, Chambers athletic director Jason Allen said. The football and baseball teams went to the AISA State Championship and the boys basketball team made the final four.

“My greatest memory of Blake would be to have seen him mature into the young man that he did,” Allen said. “He developed into more of a leader his senior year, realizing that the quarterback position really entails you to be a leader of the team. I saw him grow by leaps and bounds over the course of his career in that department.”

Sheppard is the latest member of his family tree to graduate from Chambers. His mother, father and grandmother all graduated from the school, which he said probably adds more meaning to him for his alma mater.

“I’ve gone to Chambers my whole life and I feel like that’s a part of me now,” Sheppard said. “That will always be my home and I’ll be a Rebel forever. I think everybody that goes to Chambers feels the same way. It’s just an incredible thing because everybody there cares about you like your family. The support from the community is definitely something that you won’t find anywhere else. I love it.”

The road to graduation hasn’t always been filled with love and fun for Sheppard, however. In the midst of Chambers’ athletic success lied the program’s disappointments such as losing in the baseball and football state championship his senior year.

Away from the field, Sheppard’s challenges were similar to other students.

“There were a lot of time when I was studying for a hard chemistry test or something after coming home from a basketball game at 11 p.m. or midnight but you have to stay committed to it and keep working towards your goal.”

It’s always been Sheppard’s goal to graduate with a 4.0 GPA, even between taking on three sports every year since the seventh grade or going out to eat with friends before games. That drive came from watching his parents’ work ethic growing up, he said.

“He’s a great young man,” Allen said. “Always says, ‘Yes, sir’ or ‘No, sir.’ He excels in the classroom and is well-liked by his classmates.”

Sheppard will now attend Southern Union before transferring to Auburn University to receive his Industrial Electricity degree. His goal is to one day work for a major company like Alabama Power.

“I just hope everybody at Chambers looks up to me and the commitment I showed to everything,” Sheppard said.  “I hope I’ve provided a positive influence to my underclassmen. I hope they look up to me and somebody else picks up that role.”