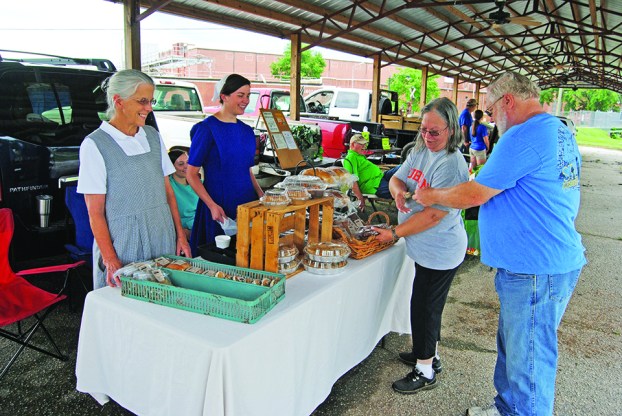 BACK IN SESSION — Lynn and Theresa Foy of Valley (at right) make a purchase at the Serenity Farms booth at Valley Farmers’ Market. Friday was the first session of the 2018 season. It will go on throughout the summer. At the Serenity Farms table were Judy Freeman (left) and daughters Anna and Liana.

VALLEY — The first session of this year’s Valley Farmers’ Market took place Friday afternoon underneath the pavilion in front of Langdale Mill. Given that the growing season is very young, there was a pretty good turnout of Alabama farmers and a pretty good selection of produce to pick from.

The Farmers’ Market takes place from 3 to 6 p.m. EDT every Friday through the growing season. There will be some special promotions throughout the season such as a Grillin Day, a Free Tomato Sandwich Day and Free Watermelon Day.

One of the farmers, Bill Carson of Carson Farms, Wadley, had a table filled with squash, beans, kale, carrots, beets, onions, cabbage, cauliflower and broccoli.

“We’ve gotten off to a slow start this year,” he said. “We had some cold weather that extended into the spring. We had a freeze four weeks ago. I lost 400 tomato plants. It’s hard to grow crops when you don’t have good weather.”

Carson has some local connections. His late mother, the former Helen Roquemore, was from Lanett. His uncle, the late John Will Roquemore, ran a tire business in Lanett.

“We are still very early in the season,” Carson said. “You don’t plant okra until May. June is the month when stuff starts coming in.”

Robin and Shannon Terry from Chilton County are new to the farmers’ market this year. They had lots of Rich May and June Gold peaches for sale.

The Terrys have a fruit stand on Highway 82 between Prattville and Tuscaloosa.

“We we’ll be open in two or three weeks,” said Shannon Terry. “We’re on Facebook.”

One of the more unusual items at Friday’s session were some 100-year-old seeds for English peas. Ora Finley of Camp Hill had them on display. They’ve been growing near the Chambers-Tallapoosa county line since before the World War I era.

Finley had turnips, mustard greens and rape for sale on Friday. He was accompanied by his daughter, Maya Robinson, and four-year-old grandson, Jayden Robinson.

“Later on, we will have rattlesnake beans, squash, tomatoes, cucumbers and watermelons,” he said.

Pulliam added, “I’ve been farming since I was 14 years old. I’m 57 now. My grandfather, Jim Finley, taught me everything I know.”

“We’ve been coming here since the Valley Farmers’ Market opened in 2009,” said Judy Freeman. “I wanted my girls to learn business skills. They are old enough to take over now. It’s been a good experience for them.”

Gaines and Rita Fetner of Huguley had handmade soap for sale. It smelled wonderful. “We think the crowds will pick up as we get into the summer,” Rita said.

WEST POINT — Across the way from Hawkes Library, sitting just above the banks of the Chattahoochee River, the wafting... read more