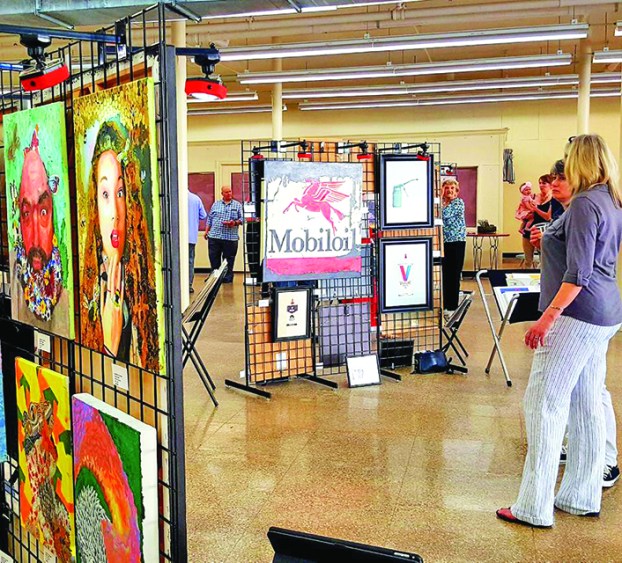 WEST POINT — Thanks to West Point Fine Arts, downtown got a little more artsy Friday, May 18. Inside of the old CraftMaster Furniture location, the newly formed group held their first art gallery from 6 – 9 p.m.

Eighteen local artists, both emerging and professional, came from around Chambers County to display their work to members of the community who came out in droves. According to the founder of WPFA Thea McElvy, approximately 200 people came to see and purchase art.

“I couldn’t be more pleased,” said McElvy. “Many of the organization’s goals were met in this three-hour event. Our community connected with the arts not only through viewing the work, but by meeting our local artists and hearing their stories.”

The gallery started out as little more than an idea. McElvy posted a photo of the empty venue to Facebook, proclaiming how good a gallery would fit into it.

“The picture just really got a lot of conversation going and I thought that while this fruit is ripe, let’s pick it and see what happens,” McElvy said. “I started up a group page and we just went from there.”

Mayor Steve Tramell allowed WPFA to use the venue and McElvy started a GoFundMe page for display settings, lights and other gallery necessities. McElvy then got to work gathering artists for the gallery.

“A lot of the comments on the original post were from artists that were local,” McElvy said. “I guess birds of a feather flock together, so I knew a lot of the people there. We also found some new artists in the Valley that I didn’t know about.”

Artists set up their work before doors opened to the gallery at 6 p.m. Friday. The pieces were for show, but many of the artists also sold their work, some for the first time.

“We had a few artists who had never shown before, at least in a gallery setting anyway, and they actually sold works,” McElvy said. “I was amazed at how many sales were made. I’ve been in different galleries and museums, and those artist makes sales, but nothing like we did that night. It was overwhelming. I think everybody was just sort of hungry for it, they were hungry for more art in our area.”

WPFA said that the event was a huge success and they plan to hold more galleries in the future, including a Dia de Los Muertos themed show in October. McElvy looks forward to expanding the show count and WPFA membership. Her dream is to continue the trend of West Point’s blossoming art scene.

“It’s a dream of mine to open a gallery, right now I just don’t have the means to do that,” McElvy said. “Downtown West Point is so perfect for foot traffic. People go down to all these great restaurants that we have but then just go home. There’s not really anything else for them to do. Our beautiful downtown is growing so rapidly and I just think [a gallery] would be something wonderful added.”

New Lanett fire truck should last for the next 20 years

LANETT — Thursday was a big day for the Lanett Fire Department. A new fire truck arrived at the fire station.... read more