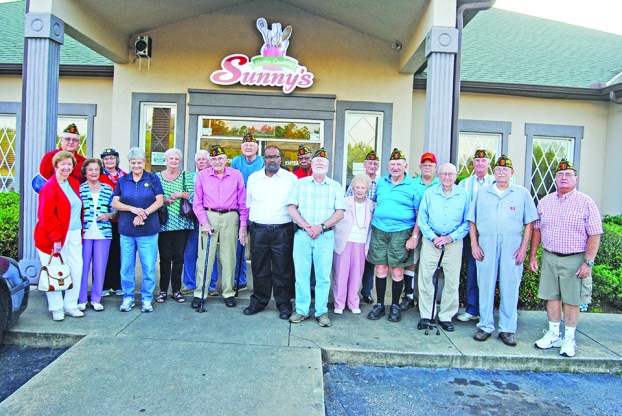 VALLEY — A date has been set for this year’s Day for the Veteran. It will be taking place at the Valley Community Center on Saturday, July 21.

Bobby Elliott, adjutant for American Legion Post 67, made the announcement at Tuesday’s monthly meeting, held at Sunny’s Restaurant. He was filling in for Post Commander Lanny Bledsoe, who was out of town.

The hours for the program will be agreed to at next month’s meeting, which will be taking place on Tuesday, July 10.

This will be the third straight year the local American Legion post has hosted a Day for the Veteran at the Community Center. Its purpose is to reach out to local veterans and put them into face-to-face meetings with a variety of officials who can inform them of benefits they have earned through their service that they may not be aware of.

“We had a really big turnout for our first program,” Elliott said. “We had over 70 veterans coming out. Those numbers were down a little bit last year, and we’d like to get them back up again this year.”

Assisting with the program is the Vet to Vet organization in Lanett, which is headed by Sam Cofield.

“We want to help any veteran we can,” Elliott said. “We appreciate the help we’ve gotten in doing this from Vet to Vet.”

Representatives from the VA office in Opelika have confirmed that they will be there on July 21st to talk to local veterans and advise them of the benefits they are entitled to. “We don’t want anyone who has done their part in serving our country to miss out on what they have earned by not knowing what was available,” Elliott said.

Nita Abney of the Legion Auxiliary reminded everyone that Thursday of this week is Flag Day and for everyone to have Old Glory flying.

“We will be attending a Veterans’ retreat near Birmingham on August 3-5,” she said. “Anyone who wants to help us with what we’re doing can donate such items as towels, wash cloths, soap and other such everyday items veterans can use.”

“We thank you and the other ladies in our auxiliary for what you do,” Elliott added.

The oldest member of Post 67 recently passed away in Cedartown, Ga. WWII veteran Murray Payton was 105. Payton had moved there several years ago to be near his family. He had been living in an assisted living facility and had been alert and active till the day he died.

Elliott said he will never forget running into Payton in a local drug store one time.

“He came up to me and told me he was worried about something,” Elliott said. “I asked him what was the problem and he told me, ‘I’m 95 and there’s nothing wrong with me.’ He was that kind of guy.”

Payton served in the Navy in World War II and was on a U.S. Navy ship that was hit by a kamikaze pilot.

“He told me that it didn’t do any significant damage to the ship and that the only person killed was the pilot. Murray told me that they had a service for him and buried him at sea. What other country but America would do something like that?”

VALLEY — The pressure within the modified two-liter soda bottle built, due to its tubed connection to a bike pump.... read more