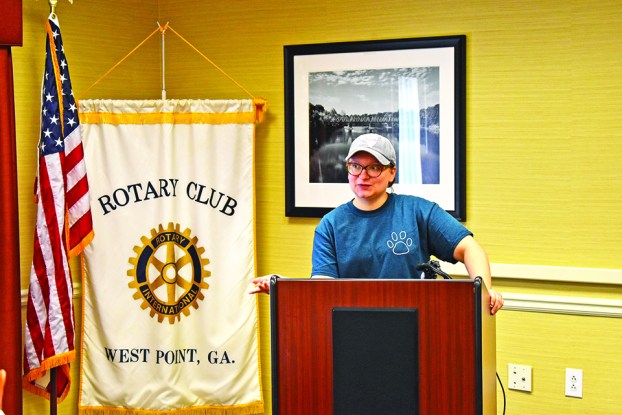 ANIMAL RESCUE: Hannah Hilderbrand speaks at West Point Rotary about her organization Big Valley Animal Rescue and what they do for area animals

WEST POINT — At the weekly meeting of the West Point Rotary Club, Hannah Hilderbrand was the invited guest speaker. She stood in the meeting room of the Hampton Inn and spoke about her passion, explaining why it was important and how the community could help.

Her passion is helping animals, and she spends 60 hours a week doing just that at the local non-profit Big Valley Animal Rescue. With only three other volunteers to help her, Hilderbrand works to pick up, fix up and foster dogs and cats without a home.

She explained to Rotary members how BVAR doesn’t actually have a location and, because of this, relies on people taking in animals for an uncertain amount of time.

“We don’t have a facility so we are foster based, which means we usually can only take in animals if we have foster homes available,” Hilderbrand said.

With the weather getting warmer, this time of year is what she called “kitten and puppy season,” an influx of stray animals due to ones that aren’t fixed. Although the Chattahoochee Humane Society and other local animal shelters takes in what they can, most of them are at capacity. That is what led to Big Valley Animal Rescue forming two years ago.

“The shelter is really feeling the impact so they will reach out to us because everybody in the south right now is just full,” Hilderbrand said. “The biggest issue in the state right now is overpopulation, and that’s related to spaying and neutering. What a lot of people don’t realize is that CHS is a nonprofit humane society but they are also contracted with the cities here in Chambers County to take in the strays. They can only fit so much.”

BVAR will pick up cats and dogs on the streets of Chambers County, fix them, chip them and then send them back out where they found them. For the ones they keep, they stay at one of six foster homes that work with the program. In these six homes there are now over 50 animals.

“We keep getting calls with people saying ‘I found this litter of kittens’ or ‘I found this mom and her kittens’ and it’s really hard to say no, especially when you meet them,” Hilderbrand said.

The goal of the foster homes is to get the animals adopted, but that happens very little and sometimes not at all.

“We have a $100 adoption fee, but people around here don’t even want to pay $100,” Hilderbrand said. “That price literally just about breaks us even if the animal is completely healthy. If we take in the animal and we are able to fix it, get its shots, test it and give it medication, that puts us right at $100. We aren’t making any extra, we are just trying to get back what we put in.”

The four volunteers at BVAR put in a lot. Hilderbrand told the visibly concerned Rotary members that she will sometimes work 60-hour weeks, all volunteer work. Not long ago she even had surgery on her knee and was back on the job the next week.

“We don’t get paid to do it, so maybe that makes me crazy,” she said. “But maybe you have to be a little crazy to do what we do.”

Hilderbrand said that their main goal is to get a facility to house all of the animals in need which will also work as animal boarding to offset some of the operation costs. BVAR is purely donation based, so their work is reliant on community members’ help.

VALLEY — A long-awaited road paving project is under way in the city of Valley. A seven-mile stretch of road between... read more