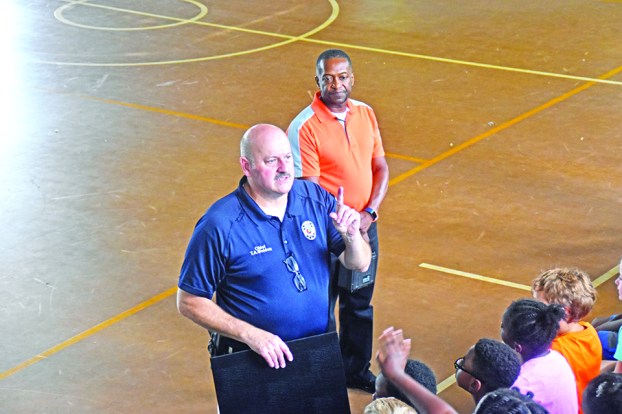 VALLEY — All summer at the Valley Boys and Girls Club of America, kids learn about science, technology, engineering, mathematics, teamwork and so much more. On Thursday morning, however, they were given a lesson on a subject that was slightly more grim, but twice as important.

Valley Police Chief Tommy Weldon came with Chambers County Multi-Jurisdictional Drug Task Force Project Manager Robert Chambers to give a speech about the dangers of drugs. The auditorium was full of young faces “ooh-ing and ahh-ing” as Weldon identified different drugs, spoke on their effects and warned about the negative effects they have on people.

“When you smoke marijuana, you can’t think straight,” Weldon said. “People will try to tell you that it’s cool or fun, but it’s neither of those, it’s just bad for you.”

Along with Program Director Kim Dozier, Head of Character Education Josephine Shahid looked on to the program, making sure kids were listening to the message. She spoke to The Valley Times-News about the importance of lessons like these, especially with area children.

“If they can recognize what’s going on then they may be able to go tell somebody,” she said. “Then they can secretly have somebody call the police and tell them ‘we’ve got some activity out here in the neighborhood. We want them to, when they see something, say ‘uh-uh that’s not for me’ and then get out of there.”

Weldon and Chambers displayed examples of drugs like marijuana and crack cocaine so that the kids would be able to identify them if they ever happened to come across some. The kids were definitely taking note, leaning in to get a better look and shooting their hands up whenever a question was asked.

Weldon said it was important for the kids to be exposed to these kinds of things in a controlled environment so that they know how to handle themselves in drug-related situations.

“We do this because so many people try to convince these kids that drugs are cool,” he said. “They don’t know about the effects of drugs and how they affect families so we just try to stress to them that drugs are not cool and cause a multitude of problems.”

He hopes his lecture will leave a lasting impression.

“Hopefully we can have an impact on them so that when they do get confronted by someone who offers them drugs, they will remember some of the things we said,” Weldon said.

One dead in accidental shooting

CHAMBERS — An accidental shooting that led to the death of a Hoover, Ala., teen on Wednesday night is being... read more