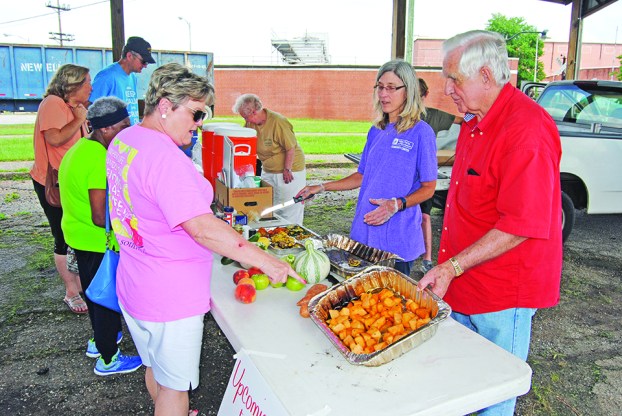 WE KNOW YOU’LL LIKE IT — Laurie Blount and Ray Edwards (at right) encouraged Farmers’ Market visitors to sample unusual items such as grilled blueberries and cantaloupe at Friday’s Grillin’Day. There was a good turnout, and lots of people tried items they’d never tasted off a grill.

VALLEY — There was a big turnout at Friday’s second annual Grillin’ Day at the Valley Farmers’  Market. Most of those turning out sampled items Chambers County Sheriff Sid Lockhart and Valley Police Chief Tommy Weldon grilled for them on site.

“We’ve grilled a little bit of everything here today,” Sheriff Lockhart told The Valley Times-News. “People really like the grilled zucchini, squash and green tomatoes. Those are popular items for grilling, but they’ve also liked grilled peaches and cantaloupes.”

The most popular item of the day were the sandwiches made of grilled bread with a tad of butter topped off by apple jelly made by Randall and Laura McClellan of Circle M Farms, Fredonia.

Mr. McClellan likes to say they are 17 miles from anyplace.

“We are 17 miles from the Valley, LaFayette, Roanoke and LaGrange,” he said.

In addition to their crowd-pleasing apple jelly, the McClellans had a good selection of other jellies at their table including blackberry, pepper jelly and blueberry pepper jelly.

One item being sampled Friday afternoon was cucurbita. Native to South America, it looks part squash and part gourd. Its fruit has many culinary uses including pumpkin pie, biscuits, bread, desserts, puddings, beverages and soup.

Valley Parks and Recreation Director Laurie Blount said she was pleased with the turnout and people’s willingness to try new things.

The farmers who brought their produce to the market were well pleased with the turnout. Mike and Deborah Dyes of Heritage Farms, Opelika, had lots of blueberries for sale. They were accompanied by their seven-year-old granddaughter, Gabriella Dyes, who’s been helping them out at the Farmers’ Market since she was a little more than a year old.

Walter Pulliam of LaFayette had a good variety of items at his table including squash, green tomatoes, and rattlesnake beans.

Judy Freeman, along with daughters Anna and Liana of Serenity Farms, Auburn, were close to selling out of their baked goods within the first hour of the market. People really like their baked bread, cinnamon rolls, sourdough bread, whole wheat bread, lemon-blueberry pies and Whoopie pies.

LaFAYETTE — The boil water notice for the City of LaFayette has been lifted after being in place since Wednesday... read more