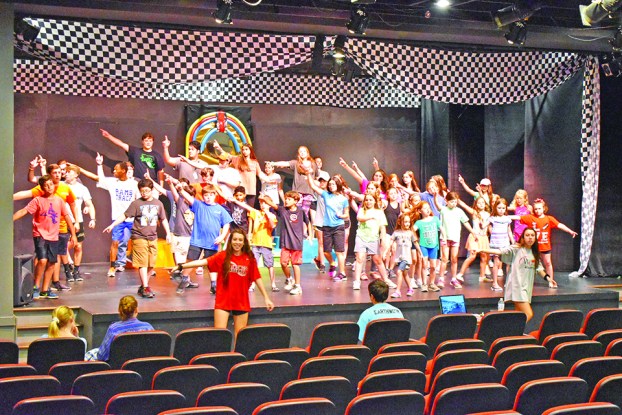 PUTTING ON A SHOW: Kids of all ages dance in unison at New Horizon Community Theatre’s Drama Camp, directed by Julia Langley

WEST POINT — Since its first iteration nine years ago, the New Horizon Community Theatre Drama Camp has taught the kids who attend it a little bit about acting, a little bit about singing and, according to Director Julia Langley, a lot about life.

Langley, a native of Wadley, Ala., has a lifetime of experience singing and performing around the world. She has been the primary vocalist for Cirque Dreams for almost 10 years, been the lead vocalist in several Broadway Series Tours and has credits as the Understudy vocalist on Broadway.

After helping with the inaugural Drama Camp nine years ago, Langley said it was the draw of West Point’s arts that drew her back.

“I remember the first time I came in I was blown away by how people just worked together and pulled in and did what it took to get everything done,” she said. “Here we are nine years later and I’m still just as enthralled with it. Some of the faces are the same, some of them have changed and I have watched a lot of these kids grow up.”

The camp is for kids ages six through 15 — though some veteran 16-year-olds have come back for one last production. Aging out of the camp isn’t the end of involvement, though, as older kids can come back as counselors to help behind the scenes. Haley Hamer, the assistant director for this year’s camp, is a veteran herself.

The final goal of Drama Camp is to put on a show, which this year is set for Saturday, June 23 at 7 p.m. The theme of the show is “Rock around the Clock” and campers will be performing songs and scenes from the 1950’s.

Kids spend each day learning lines, practicing songs and going through the movements of choreography. It is sure to teach them how to be better thespians, but Langley said it will teach them much more than that.

“It teaches so many skills, and not just theatre skills,” she said. “They’re learning things that they can actually take outside into the world and use. Things like job interviews or anything that requires them to speak publicly and to talk and interact with other people socially.”

The end of day one saw the actors up on stage patiently arranging themselves with Langley’s direction and successfully going through one of the songs’ dance moves. By the end of the week they will all know the entire show by heart.

“I hope they get a love for theatre,” Langley said. “That’s number one because it’s life changing in itself. It shapes a lot of decisions that you make and theater and music completely changed my life. I see kids that come from all walks of life and all different backgrounds, all different levels of skill and its one place that they can all go and let that inner light really shine.”

Langley and the campers are as excited for this year’s production as they were for year’s past, and the director hopes to continuously bring this
form of art to West Point well into the future.

“I love this theatre and I think that most people don’t even realize what a gem it is,” she said. “This is a small town. It’s a small area and so sometimes you feel like you don’t have resources but this is one of the most wonderful resources that you could have.”