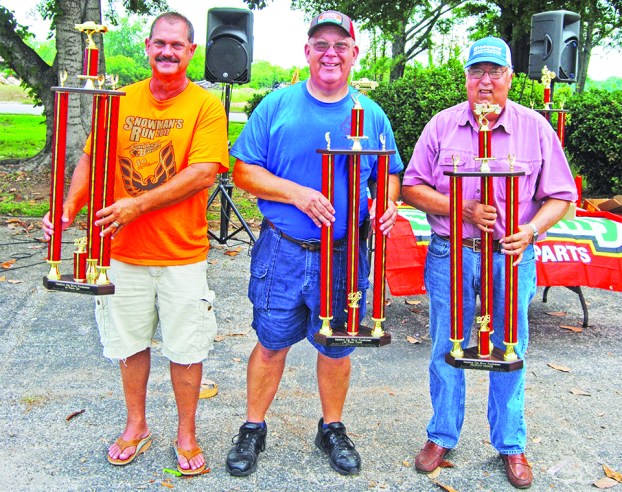 Wayne Clark | Times-News CAR SHOW WINNERS: Shown above are the winners of Saturday’s Maddox Car Show, held next to El Rio Restaurant in Lanett. From left, are Ken Ragan of LaGrange, Best Car winner for his 1978 Pontiac Trans Am; Sheriff Sid Lockhart, Best Truck award for his 1966 Chevrolet pickup truck and Johnny Boone of Marcoot, Ala., winner of the Maddox Choice Award for his 1965 Chevrolet C-10 pickup truck.

LANETT — Four-year-old Maddox Talley celebrated his fourth birthday on Wednesday, June 6 and on Saturday over $4,000 was raised in a car show that will help with the training of his new service dog.

The son of Felicia Cannon-Baker, Maddox has had some severe struggles in his first four years. At 32 weeks in her pregnancy, the unborn child was diagnosed with hydrocephalus, a rare medical condition that affects only two of every 1,000 newborns. “Maddox was born at UAB’s Women and Infant Center and transferred to Children’s of Alabama Hospital within two hours of his birth,” said his mom.

Two days later, an MRI determined that Maddox had a condition known as Septo-Optic Dysplasia in addition to the hydrocephalus.

At only three weeks old, brain surgery was performed to correct an excessive fluid buildup on the boy’s brain. Two weeks later, Maddox underwent a second brain surgery. This emergency procedure was done due to an infection that had taken place. This required a 45-day stay at Children’s Hospital with three different antibiotics being administered by an IV.

During this lengthy stay, Maddox had a seizure and was later diagnosed with epilepsy.

If all this wasn’t difficult enough, at six months of age the little boy was found to have a rare form of diabetes and a sensory processing disorder. Because of this, he will need to be accompanied by a service dog.

A black lab named Mirra has been donated to the family.

“The dog will help tremendously,” said Cannon-Baker. “Maddox struggles with his daily routines as well as his surroundings. Mirra will have to have some specialized training.”

The training for a psychiatric service dog takes 12-14 months and costs around $20,000.

Saturday’s car show in Lanett was a good start to raise that. A total of $4,116 was generated.

“We will be having more fundraisers to come,” said Maddox’s grandfather, Ron Stuckey, who was at the car show. “We want to thank everyone for what they did today.”

“The dog will help him recognize surprises and help him to calm down when he gets upset,” Stuckey said. “He will go in for training when he is one year old. We have time for more fundraisers before then.”

Stuckey thanked Scott Willingham of Scott’s Towing on having done a great job in a short amount of time.

“I think we had a great turnout today given that it all came together in one week,” he said.

Despite all the setbacks he has had, Maddox has courageously fought back in an effort to be a normal child for his age. He even got to judge the car show, picking out his favorite cars and trucks. He chose Ken Ragan’s 1978 Trans Am as the best car, a 1965 truck owned by Johnny Boone as the Choice Award winner and a 1966 Chevrolet truck owned by Sheriff Sid Lockhart as his favorite truck.