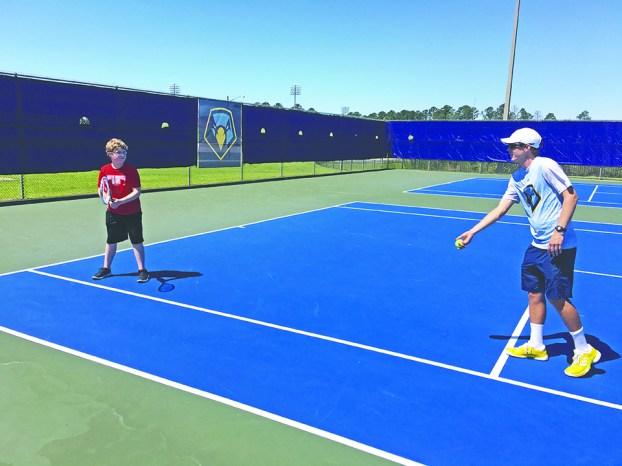 CLASS IN SESSION: Point University head tennis coach Chad Simpson tosses up a tennis ball to a camper during day one of the Point University Tennis Camp on June 4, 2018 at the Valley SportsPlex.

VALLEY — The Point University Tennis Camp began on Monday morning at the university’s courts at the Valley SportsPlex.

There were 15 young participants who spanned from age six to high school on the opening day of the camp.

“My goal is just to try to grow the game of tennis in this area,” Point University tennis coach Chad Simpson said. “It’s a great sport that you can play for life, a sport where you’ll get a lot of health benefits and a lot of joy from it. So, we’re just trying to promote it and get more kids playing in this area.”

The participants arrived at the camp at 8:30 a.m. EDT for warm-ups and player evaluations shortly before the first session began at 8:45. The first session ran for over an hour and the campers got a 30-minute intermission at 10 a.m. Once the second session wrapped up at 11:30 a.m., parents of the younger participants arrived and picked up their children. Many parents asked Simpson for early first-day evaluations while registering for future sessions with the coach.

“Leaving the court happy is the goal with the youngsters,” Simpson said. “For the high schoolers, we’re just trying to train them up and make them better for their high school teams.”

Simpson fell in love with tennis at an early age himself. His father, Scott, was a professional in the sport while his aunt and sisters have played as well. Simpson graduated from Danville High School in Illinois before playing Division I tennis at Liberty University in Virginia.

“I grew up at the tennis club, played there my whole life, so it’s a passion of mine,” Simpson said. “I’m glad I get to do it for work now.”

The Skyhawks just wrapped up their fourth season under Simpson and the program continued to show progress.

“We’ve been rising each year, this year we finished in the top 25,” Simpson said. “We were able to beat Division I Alabama State, who made it to the NCAA Tournament as one of the top 64 teams in D-I. We have a lot of really good players and we hope to be in the Top-10 next year.”

Late-entries for this camp are still welcomed, Simpson said. He can be contacted at

chad.simpson@point.edu. The current camp is going on until Thursday.

For tennis players in the Greater Valley Area 18 years or younger, Simpson is partnering with Jim Bob’s Chicken Fingers to host the Valley SportsPlex Tennis Tournament this Friday and Saturday. Players interested in registering can email Simpson as well.

The Simpson Tennis Academy will begin its first summer session on June 11. In the three-week program, participants will be offered training for children four years old and older.

The two sessions will run from June 11 through June 29 and July 9 through July 27.

One of the biggest debates in the world of professional sports that has re-emerged recently is whether or not LeBron... read more