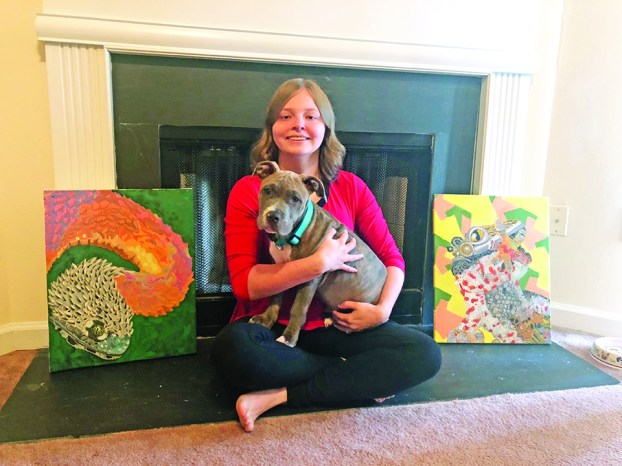 Devin McGLON | Times-News Passionate artist: Artist Jewlynn Davis shows off some of her art pieces along with her dog, Chunk.

Davis fell in love with art during college

VALLEY — At just 23-years-old, Valley native Jewlynn Davis has a love for art like no other.

She began her journey as an artist during her freshman year of college. Originally thinking about only minoring in art while becoming a veterinarian, she took a few art-based classes, which infatuated her with the practice and led to her decision to finish out college as an art major with a minor in web design.

“I have drawn ever since I was little
and always desired to take an art class in high school, but it wasn’t until my freshmen year of college that I realized how much I truly loved it,” she said.

Davis described her process as starting with an idea, then making a few thumbnail sketches.

“Then, I’ll take one or two reference photos, put them in Photoshop and manipulate the colors to ensure I have the right color palette,” she said. “I’ll tweak a few things, (which) finally leaves me to sketch it out on the canvas and slowly work to finish the painting layer by layer.”

She currently only oil paints, but is working to widen her skills and begin adding watercolors.

Her main pieces focus on man integrating into wildlife, and the change and adaption that has been forced on nature.“One of my favorite pieces of art is of a snake with a metal head,” she said. “The metal symbolizes how wildlife is having to adapt to man encroaching on their environment. This art piece was the first oil painting I ever did.”

She described art as her sweet escape.

“When I’m painting, I feel like I go into the world of the painting, leaving me detached from everything else around me. I paint a lot when I’m stressed or having a bad day, and it makes me happy again.”

Davis has recently become a part of the West Point Fine Arts Group.

“I am super excited to be a part of this group,” she said.

In addition to painting, Davis loves to read and take care of her dog, Chunk.

She is the oldest child of Jason and Geneva Davis, has a brother named Austin and is married to Courtney Quinton.

Davis currently works in a clothing store, but was just accepted as an intern at Interface where she will be working with graphic design.

Davis and her West Point Fine Arts group will be in an art show Oct. 11 at El Rio in Valley.

VALLEY — It’s widely known that the state of Alabama will be celebrating its 200th birthday in 2019, but something... read more