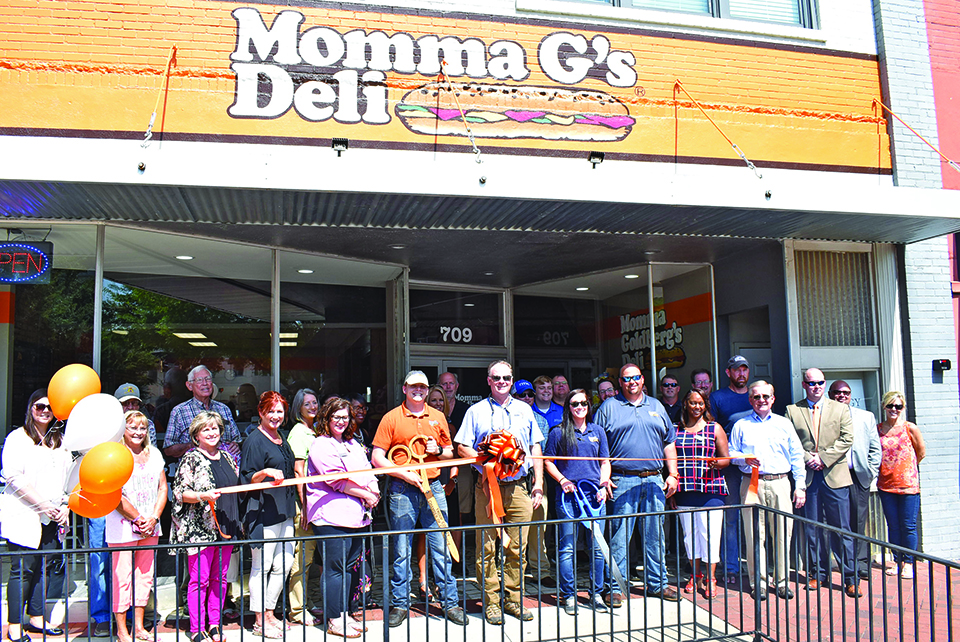 WEST POINT — Orange and white balloons and the smell of fresh steamed sandwiches welcomed the crowd of people who came downtown to witness the ribbon cutting at Momma Goldberg’s Deli Thursday morning.

The eatery, commonly referred to by fans as Momma G’s, held its grand opening ceremony after having been open for the past few weeks. Members from all parts of the community attended and West Point’s Mayor Steve Tramell shared a few opening words.

“I want to welcome everyone today to what I am going to start referring to as Restaurant Row,” he said. “That may sound premature, but I think you are going to see more and more of this. We will be the destination for the whole region to come to West Point and, whether they want to eat or shop, this will be the spot.”

Members from both LaGrange-Troup County and the Greater Valley Area Chambers of Commerce spoke to the crowd gathered outside the restaurant.

“We are so excited to have you guys in West Point,” Chair-Elect of LaGrange-Troup County Chamber Marlene Rhodes said. “West Point is such a wonderful, beautiful downtown area and I know you guys will enjoy being here.”

Owner Matt Livingston has already been enjoying the downtown area.

Momma Goldberg’s is just one on the several restaurants he operates in the area, including Coach’s Bar and Grill and Railroads West Point. The idea to open a Momma G’s franchise actually came to Livingston when he decided to split the Railroads property during its expansion..

“This part was basically laid out like a Momma G’s already so we didn’t have to do a whole lot of overhaul on it,” Livingston said. “That’s why we were able to open up so quickly.”

He said that Momma G’s was a natural choice for his desired growth of the area.

“In the city of West Point we wanted a little bit more growth, more restaurants and more franchise names that people know,” Livingston said. “Momma G’s is a staple for sure. Anyone else from around this area, anyone who went to Auburn, they know Momma Goldberg’s. The name is powerful and we wanted a franchise here in town.”

Livingston and the Momma G’s crew plan to serve the area so that this franchise becomes a staple here, too.

Keychains giving discounts were given out to incoming Point University students and those at the ribbon cutting to give people reasons to come in and try the food, besides the smells.

“You have a variety of sandwich shops out there with all the other name brand stuff,” Livingston said. “Momma G’s is different because of the process it goes through. Every thing is fresh, the meat’s sliced every day, the vegetables are sliced every day, you get the sandwich hot and steamed and it comes out quickly.”

He hopes that the difference will allow him more opportunities to support West Point and surrounding areas.

“This gives us another option to give back to the community,” he said.