Easlick, Story will face off this fall in probate judge race 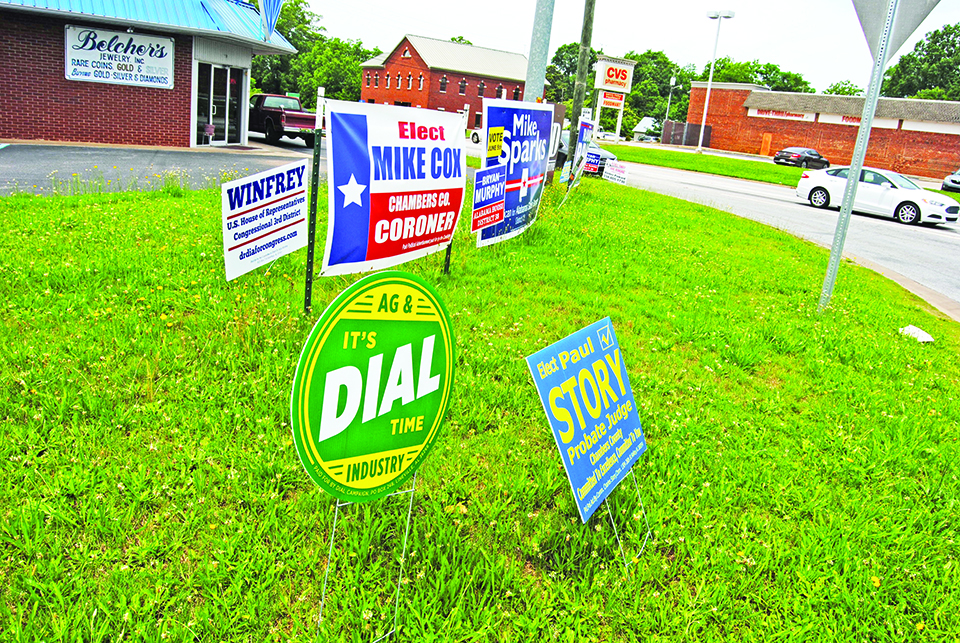 ELECTION SEASON – There are lots of campaign signs at busy intersections these days. Campaign activity peaked on Tuesday with the Alabama Democratic and Republican Party primaries. Signs for the winning candidates will remain in place through the November 6th general election.

LaFAYETTE — One of the most watched local races was partly settled on Tuesday with Paul Story defeating Cary Baldwin in the Republican primary and incumbent Brandy Easlick defeating Susan Harmon in the Democratic race. This sets up a November race between Easlick and Story.

Story is the son of former Chambers County Clerk of Court Charles Story and is making a strong bid to carry on a family legacy in county government.

Easlick won her second straight race by a large margin. Six years ago she won her first race for probate judge in a big way.

“It looks like we had a good turnout today,” Story told The Valley Times-News. “I appreciate the people getting out and voting. I also thank my opponent for running a clean race. We did the best we could in getting out and meeting people and talking to them about their concerns. We will keep doing that between now and the general election. We will keep beating the bushes and trying to meet as many people as we can.”

Story is now three-for-three in political races. He is currently serving his second term as a member of the Valley City Council.

Easlick said she was both pleased and humbled by the support she received on Tuesday. “I have tried hard to bring some improvements to the office,” she said. “This shows that people approve of the work I’ve done.”

Easlick said there’s much more work to be done between now and the Nov. 6 general election.

“We will be getting out and meeting more people and talking to them about what they’d like to see done in the probate office. I have really enjoyed serving the public. It is an honor being a public servant and working for the people. I will always be mindful of that.”