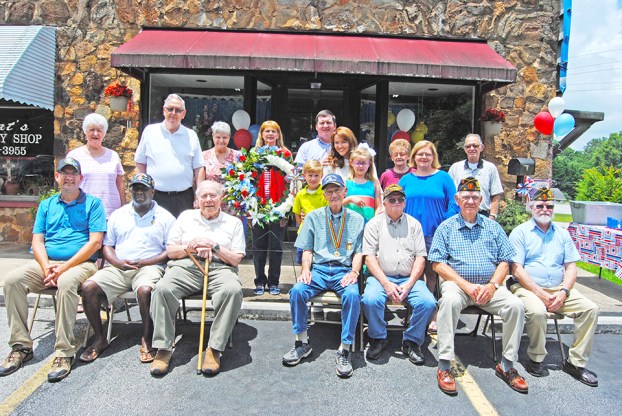 VALLEY — On Saturday afternoon, a big send-off event took place at Floral Expressions, located on Trammell Block in the Fairfax community. A big crowd, including many local veterans, had gathered to wish a local couple a safe journey to Washington D.C., where they placed a wreath at the Tomb of the Unknown Soldier. LuAnn Sims made the wreath, and it was placed there during a ceremony on Monday.

William and Tai Boos had been planning to take their two children, Isabella and Connor, to the nation’s capital as part of a summer vacation. While planning an itinerary for the trip, Tai read that wreaths were laid at the Tomb of the Unknown Solider in Arlington National Cemetery on a daily basis. She checked with the office of Congressman Mike Rogers well in advance to see if they could bring a wreath for the Monday, June 18 ceremony, and arrangements were made to do that.

Tai asked LuAnn Sims if she could do that for her, a request that made her speechless. “It’s such an honor to do something like this,” Sims said. “I’d done this previously around ten years ago. William Britt was taking a local Boy Scout troop to Washington and they made arrangements to have it done. I never dreamed I’d have a second chance to do it. I have a great uncle, Thomas Thomaston of Lanett, who is buried in Arlington National Cemetery.”

“He joined after 9-11,” said Tai. “He wanted to go and protect those who couldn’t, or wouldn’t, protect themselves. He felt the Lord wanted him to do it.”

The wreath that was made for their trip contained a wooden cross with the names of some men Boos served with who were killed in action. They include Staff Sgt. Clayton Bowen, Sgt. Marshall Edgerton, Sgt. Chris Stout and Sgt. Michael McCluskey.

Tai is a Valley High graduate and today works for Auburn University.

“This is going to be a family vacation,” Tai said. “Our children and I haven’t been to Washington before. We’re looking forward to it. It’s so good to have all these veterans here today. My paternal grandfather, Gene Yarbrough, served with the U.S. Air Force in Korea. My maternal grandfather, the late James E. Bridges, was with the U.S. Army in Korea. I am proud of their service to our country, and I’m very proud of my husband’s service.”

There are tombs of unknown soldiers in many countries. The U.S. Tomb of the Unknown Soldier overlooks Washington D.C. from a hilltop in Arlington National Cemetery across the Potomac River in Virginia. On March 4, 1921, Congress approved the burial of an unknown American soldier who had been killed in World War I.

On the front of the tomb are three Greek figures representing peace, victory and valor. Six wreaths engraved in stone represent the six major campaigns of WW I.

On the back of the tomb are the words: “Here rests in honored glory an American soldier known only to God.”

West of the crypt of this soldier are the final resting places for unknown soldiers from the U.S. who died in WWII and Korea. There’s an empty crypt that once contained the remains of a soldier from the Vietnam War who was unknown. In 1998, that soldier was identified by means of DNA and the remains were returned to his family. Since October 2017, there are no unknown soldiers from the Vietnam War.

Murder suspect turns himself in; one still at large

WEST POINT — A suspect wanted in connection with a shooting last week has turned himself in. Eric Bridges, 25,... read more