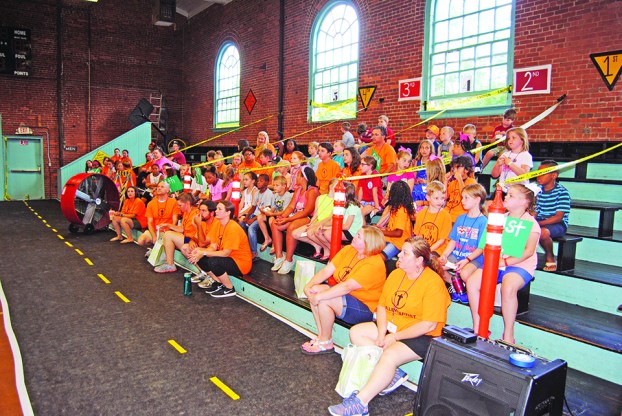 READY TO GET STARTED — Local youngsters had lots of fun at Thursday’s first session of Kids’ Camp, sponsored by Valley First Baptist Church. More than 120 children in the k-5 age group pre-registered and more signed up on Thursday.

VALLEY — Valley First Baptist Church took a different approach to summer break this year. Instead of having a Vacation Bible School, as most churches do, they had a Kids’ Camp. The first session took place Thursday afternoon with a second session on Friday. It was a new and different idea but was well received by the community.

“We had over 120 kids to pre-register for today’s first session,” said Katrina Huguley, who helped organize the two-day camp,” and we have had some walk-up traffic today. We doubled what we normally have for Vacation Bible School. We are extremely pleased with the way things have gone.”

The camp was scheduled to take place just outside Langdale gym, on the ball field near the Christmas Merry go Round site. With that area being water logged due to recent heavy rain, the camp was moved indoors to the gym.

Adult volunteers with the church were quite clever with their use of the road signs. They were members of a Roman road crew and recreated a Roman-style road inside the gym based on themes in the New Testament Book of Romans.

Children taking part in the camp ranged in age from kindergarteners to those about to enter middle school. They were grouped by age with six different groups rotating among six stations with activities such as inflatables, games, crafts, food and Bible study at each station. The sites were connected with simulated blacktop roads with signs pointing the way.

“Our theme is ‘The Roman Road to Salvation,’” Huguley said. “It’s based on the Book of Romans and that we find salvation through Jesus.”

The adult volunteers wear orange T-shirts with “Roman Road Crew” on the back with five bible verses printed, such as Romans 3:23 “For all have sinned and fell short of the glory of God” and Romans 10:13: “Everyone who calls on the name of the Lord shall be saved.”

“What we’ve done this year is a spin off from Vacation Bible School,” Huguley said. “It’s a community event outside the church walls. We’d like to do this again next year.”

The three-hour sessions start at 5:30 p.m. The more popular stops along the road are the inflatables, where there’s an exciting fall to the bottom, and the food station, where there’s pizza, hot dogs, snow cones and popcorn. At the craft station, the kids learned how to make some keepsakes while listening to Bible stories.

GREATER VALLEY AREA — Another local team will compete on the national level this summer. In its third year of... read more