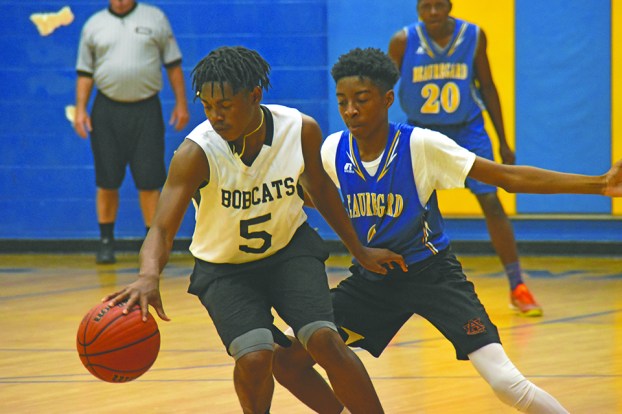 Fresh-faced Beulah Bobcats discovering how to play on Varsity level

OPELIKA — A Loachapoka forward drove alongside the baseline against the Beulah defense on the right side of the basket before throwing up an off-balanced leaner. The forward’s prayer swished through the net while the referee’s whistle blew signaling a blocking foul on the Bobcats. The forward missed his free throw but quickly followed up his own shot in the middle of the lane to add two more points to his total.

The exchange summed up the day for Beulah, who dropped two scrimmages during Wednesday’s Play Date at Beauregard against Loachapoka and Beauregard, 48-18 and 68-22.

The Bobcats’ first game of the day was against Loachapoka. Beulah began the game with a lot of one-and-done possessions. Most of Beulah’s offensive possessions ended in deep three-pointer attempts clanking off the rim or backboard with a Loachapoka rebound.

“I want to see us move the ball, stop standing around. I want to see us pass and cut to the basket,” Graham said after the Loachapoka game. “And stop taking shots that we see on TV on NBA games.”

Loachapoka, however, played a very patient game on the offensive end. The opponents waited for plays to develop and spread the floor well. On the defensive side of the ball, Loachapoka seemingly read all of Beulah’s passing lanes perfectly, grabbing multiple steals in the matchup.

Beulah guard Lonzie Portis ended a long Bobcat-scoring drought with 5:30 remaining in the first half by knocking down a high-archer off the glass to make the score 18-4 with the Bobcats trailing.

Beulah didn’t run many actual plays during the game, with multiple players experiencing Varsity-level competition for the first time, Graham said. Loachapoka looked like they were playing a 2-3 zone on defense while some Beulah players appeared to just be standing on defense at times. Loachapoka looked more conditioned than the Bobcats. Beulah lost the game, 48-18.

The Bobcats came out looking much different in the second game of the back-to-back by sharing the ball and playing with a better pace in the first half against Beauregard.

A contested corner three from Portis gave Beulah its first lead of the day, going up 9-8 on the Hornets. The Bobcats appeared to be more energized early in the effort. A handful of the three-point attempts the team made in the first game began to fall in this one. The Bobcats were trailing at halftime, 30-17.

Then the team went cold again.

“At the end, I guess we got tired, we’re not really in good shape but we’re working on that,” Graham said.

The turnovers from game one returned and quick three-point attempts also returned for the Bobcats in the second half as Beauregard began running away with the game. The Bobcats ended up losing, 68-22.

“I’m alright with the boys, they came and gave a little effort,” Graham said. “They’re showing up, so that’s half the effort. We had a few [players] missing today, some of them had to work and had other obligations, so we’ll be alright. We’ll get better.”

Bobcat scorer Ty Williams was among the players who weren’t present at Wednesday’s Play Date. Wednesday marked the end of summer Play Dates for the Bobcats.