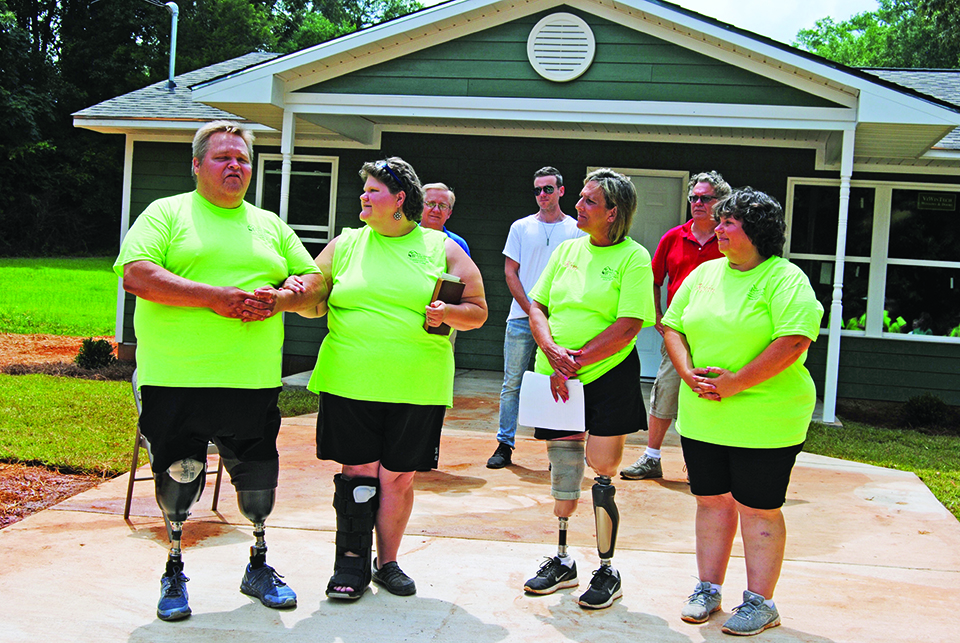 A NEW HOME IN VALLEY — New homeowners Rodney and Carmen Lott (at left) were overjoyed by the job done by more than 50 volunteers in building their new hone in 26th Avenue in Valley. “It’s an awesome thing to be a child of God,” he said. “We love each and every one of you and thankj your from the bottoms of our hearts.” At right are Executive Director Kim Roberts and Robin Pierre of the CFCP. In back, from left, are Jerry Ledbetter, Matthew Thrower and CFCP President Curt Johnson.

VALLEY — At Friday afternoon’s dedication ceremony for Chattahoochee Fuller Center Project Home No. 40, CFCP Executive Director Kim Roberts said that the Greater Valley Area is appropriately named because there are so many great people in the area.

“They are always there to help us keep doing projects like this,” she said.

Some finishing touches will be done to the home next week, and new homeowners Rodney and Carmen Lott will be moving in next month.

In addition to thanking more than 50 volunteers who worked hard for long hours and in oppressive heat to have the new home ready for the dedication, Roberts also thanked corporate donors such as Hardie Board, which has donated enough siding for three new homes – No. 40, 41 and 42; Knauf, which provided both conventional and blown insulation; Norbord, which donated OSB for the roof; and World Vision, which sent in the needed shingles at no cost.

Knauf also made a big assist in the way of volunteers. Approximately 20 Knauf employees worked at the site this week.

CFCP President Curt Johnson thanked a 10-member group from Pennsylvania that played a key role in getting the house built. “We thank Barry and Amy Stuck for what they did this week,” he said. “We thank everyone who made donations of the supplies we needed. The donations have been great.”

Johnson assured supporters of the CFCP that everything donated goes into the houses that are being built.

“This has been a great build,” he said. “The hot weather wasn’t so good, but it was so good having so many young people here helping us because they are not in school.”

Johnson added that a number of people came forward with donations when they learned that the new home was being built for Rodney and Carmen Lott.

Roberts thanked Brandi Burrows, a youth leader from Providence Baptist Church, for coordinating youth in taking care of such tasks as painting the Hardie board green and the trim and interior doors white. They also helped with additional tasks such as carrying the shingles and sheet rock. In addition to Providence Baptist, youth were there from Hopewell Methodist, Refuge Point, Next Ministry and Free Will Baptist in Opelika,

“Thank you all for being here today,” said Rodney Lott, “And thank you for what’s been done here. This home is so beautiful. We want to thank every one of you from the bottom of our hearts. We love you. It’s an awesome thing to be a child of God.”

A surprise addition to the new home was a handicap ramp that had been installed on the left side of the house, entering the back. It doubles as a deck wide enough for grilling, something the Lotts like to do.

That was Barry Stuck’s idea.

“You guys are great to work for,” Stuck said. “I arrived on the work site at 6 a.m. one day this week to be here when the dry wallers arrived,” he said. “They were waiting for us.”

“Barry and Amy have a wonderful ministry,” Roberts said. “God didn’t need them here, but He wanted them here.”

One of the more popular people on the work site this week was Rodney’s Aunt Carolyn, who brought cold water, popsicles and ice cream. The neighbors were pretty popular, too. They’d come by on riding lawnmowers bringing cold water for everyone.

Council Member Randall Maddux said it was great to have these home building efforts going on in the local area.

“It’s a good thing to have people helping other people this way,” he said.

Roberts thanked New Birth Ministry for helping out with the project.

“They had four or five young men on the job site,” she said. “We take these guys and love them. We know they will be good citizens one day.”