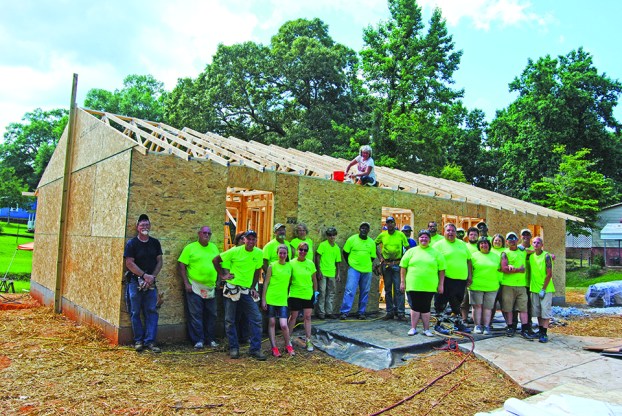 CFCP NO. 40 GOING UP — Volunteers working on Chattahoochee Fuller Center Project (CFCP) Home No. 40 made some substantial progress on Monday and were on pace to have the new house dried in at 10 a.m. on Tuesday morning. The house is being built on 26th Avenue in Valley as a new home for Rodney and Carmen Lott (in front, to the right. Homes No. 41 and 42 will be going up in West Point this fall.

Fuller Center starts on next home

VALLEY — At approximately 8 a.m. EDT on Monday, approximately 50 volunteers began work on Chattahoochee Fuller Center Project No. 40 on 26th Street in Valley’s Red Dirt Hill neighborhood. Despite it being a hot, muggy day, lots of work got done. A complete shell of a house was in place, and construction was on pace to have it dried in by 10 a.m. Tuesday.

Most of the work crew were wearing yellow-green t-shirts with “I volunteered for Chattahoochee Fuller Center Build No. 40” on the back.

“This is the first time we have had youth groups from local churches on the work site,” said CFCP Executive Director Kim Roberts. “We had four different groups with young people in the 12-18 age group. They’re from the Refuge Point Church in West Point, the Next Church in Lanett, Providence Baptist and Hopewell Baptist. They painted all the Hardie board that’s going outside and all the trim around the house.”

“We were so pleased to have Dr. Charles Harris from Riverside Veterinary Hospital working with us today,” Roberts continued. “We had a good group with us from Knauf and some people from the Church of the Highlands in Auburn. We appreciate them being here. They’d earlier built the walls for the house.”

Some of the hardest working people on the site came all the way from Pennsylvania to work on this project. There are ten of them and they are all from the same family, the Stucks. They’ve been in the local area on previous Fuller Center builds.

The current build is the seventh CFCP new home to go up in Valley. The first two houses went up on 41st Street in Langdale, four more were built the last couple of years in the Rehobeth Heights neighborhood, with the newest home going up on Red Dirt Hill.

Plans are to have a home dedication program at 3:30 p.m. on Friday. At that time, new homeowners Rodney and Carmen Lott will receive the keys to the house and a new Bible. Making this presentation is a long-standing Fuller Center tradition.

No. 40 is the second new home to go up this year. No. 39 went up off Huguley Road in the Rehobeth Heights area earlier this year. More construction is slated for the fall. Homes No. 41 and 42 will be going up in West Point.

“Isn’t it amazing?” said Roberts. “As long as we keep getting support for what we are doing we will continue to build new homes.”

VALLEY — Although it has been open for the past few weeks, the Ace Hardware on 20th Avenue held its... read more