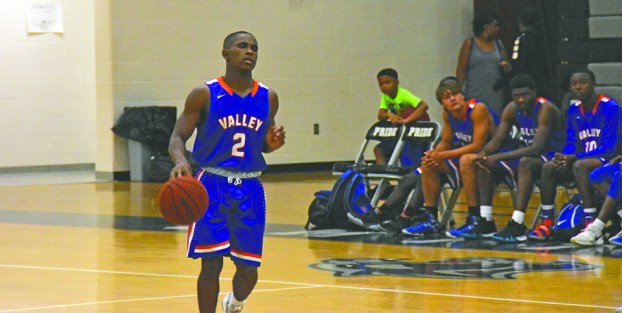 A guard brings it up for Valley High School during summer play at Smith Stations High School on Thursday. Photo by Rashad Milligan

SMITHS STATION — Multi-sport athletes in the Greater Valley Area took a break from summer workouts to get some time in on the basketball courts at Smiths Station High School on Thursday. Local teams featuring Beulah, LaFayette, Lanett and Valley High Schools were all represented throughout the day to get full-speed game simulations against other schools.

“It’s a summer camp,” Beulah boys basketball head coach Curtis Noble said. “We try to get the kids in to work on some of the things that we have to work on to improve for the season.”

Noble’s Bobcats faced off against the LaFayette Bulldogs on the second court in a match up of big bodies battling
in the post for rebounds in the afternoon.

On both courts at Stations Smith, teams alternated nonstop and most, if not all, participating schools played multiple games on Thursday. Many players appeared to be in game shape already, with no lack of fast breaks for spectators to watch in every game. Lanett’s B-Team game planned on running a lot on offense because one thing the team wanted to work on this offseason was transition offense.

“We really didn’t want to set anything half court,” Lanett B-Team coach Terrance Price said. “We really just wanted to run up and down the floor, so we’ve accomplished what we wanted to accomplish so far this summer.”

Coming into next season a year older, a few varsity players in the games attempted dunks and perhaps made better decisions on the offensive side of the ball.

There were a few defensive stops by all the teams, some defenses showed a full-court press, others played man, while 2-1-2 and 3-2 zone were also spotted.

In-between the games, the teammates had ample time to socialize with players from other schools and continue to build chemistry with their own team.

Players constantly wondered from one court to another with the synonymous sounds of squeaky sneakers, scoreboard clocks buzzing, rims clanking, coaches yelling and referee whistles going off in the background.

The literal Lanett twin towers of Cameron Boozer, Jr. and Zameron Boozer seemed to be fan favorites with the spectators as the 6-foot-6 brothers surveyed the gymnasium.

Players from other teams asked Lanett senior Trikweze Bridges what college he was going to. The four-star recruit in football jokingly responded with colleges that weren’t listed on his top five that he announced earlier in the week of Florida State, LSU, Oklahoma, Oregon and Penn State. Various student-athletes who played in Thursday’s summer circuit also began offseason workouts for football this week.

At tip-off, though, the players’ competitive juices flowed in and they focused on the only sport that mattered at the time, which was basketball.

WEST POINT — Derek Kite was officially announced as the head swimming coach for both the men and women at... read more