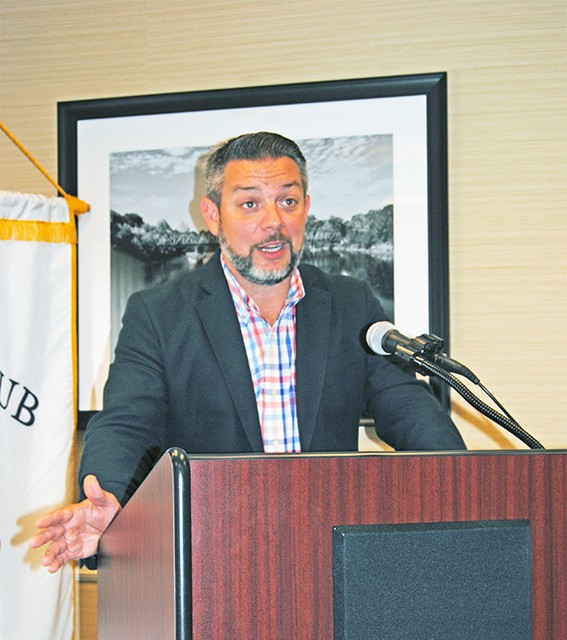 LANETT — Jimmy Harmon, the director of the Alabama Sheriff’s Girls Ranch in Tallapoosa County, was the guest speaker at Thursday’s noon hour meeting of the West Point Rotary Club. He thanked members of the club for their past support and gave an update on what’s been going on at a home for abandoned, abused and neglected girls. They range in age from six to 18 years of age and in most cases would have no safe place to go if it wasn’t for the Girls Ranch.

“We have kids who are there due to no fault of their own,” Harmon said.

At the present time there are 18 girls at the Ranch. Three of them are sisters. “They lost both of their parents in a car wreck,” he said. “They then moved in with their grandparents , and they lost both of them (to natural causes) over the next six months.”

Harmon, who is married and has young children of his own, gets emotional when he talks about two girls who had been living under a bridge when they came to the Ranch. The older sister, who was 17, supported herself and her 15-year-old sister by prostitution. “She was selling her body,” Harmon said. “When we brought them to see the Ranch for the first time and offered them the chance to stay there, they couldn’t hold back the tears.”

When they were shown the kitchen in one of the homes and how well stocked the cupboard was, the older sister recalled her past life. “I would hate to tell you what I had to do to get a can of beans,” she said.

At one time they were having a problem with a six-year-old girl who was frequently wetting her bed at night. They talked to her about it and she told them she was afraid to get up by herself at night because the last time she did that in her former home she was raped.

The Ranch gives girls who are escaping such situations a chance for a new life. It’s not an easy, laid-back existence. The girls live on a 200-acre ranch. It’s a Christian environment that emphasizes personal responsibility. They are up at sunup every day and have chores to tend before they go to school. They are very active in their school and participate in many activities. In the evenings, though, they are very dedicated about studies.

“The Ranch is about opportunity,” Harmon said. “We are giving them a first chance in life. Our goal is to make our place the best child care organization in our region.”

Harmon said that there’s much work to do in our three-county area on behalf of the young. Every year, said Harmon, there are an estimated 2,700 new cases of child abuse in Chambers, Randolph and Tallapoosa counties. “That’s about how many students graduate each year in this region,” he said. “For every high school graduate we have, there’s a kid out there who is going hungry or is being abused or neglected.”

The Girls Ranch is a success story that Harmon loves to talk about. “Last semester, our 18 girls had a cumulative grade point average of 3.47 (on a four-point scale),” he said. “Our house parents work really hard with them.”

Graduation ceremonies are a bittersweet. It’s good that a girl from the ranch is getting a diploma, but she will be leaving the Ranch for college. One girl who came through the program is now on scholarship at Troy and is a cheerleader there. Another is heading to the University of West Alabama (Livingston), where she will play basketball. Many have gone to Southern Union for two years and then transferred to a four-year school like Auburn.

Some of the girls are away right now on a mission trip to Florida. “They want to give back,” Harmon said. “They are ministering to kids from bad neighborhoods. We also have some trips planned to Six Flags. I’m not so much into that at my age, but the kids love it.”

Harmon thanked Sheriff Sid Lockhart for his support. “He’s always doing things to help us,” he said. “He recently brought us some Vidalia onions. We also thank the people with the Fredonia community garden. Dan Harriger does a great job with it, and the girls love coming over the visit and to pick vegetables.”

Harmon said the Ranch welcomes assistance from the community. “We are in constant need of help,” he said. “With a 200-acre farm, there’s lots of bush hogging and planting going on. We want to help more kids, but we need to make sure our infrastructure is right. We haven’t had any runaways. Our kids want to take advantage of the opportunity they have had in being there. It’s so much better than the life they previously had. I ask that you pray about letting employees of small businesses help us. They can do volunteer work or make small donations.”

“Everyone in this room appreciates what you do,” said Club President Gus Darden. “We know that your heart is 120 percent into it.”