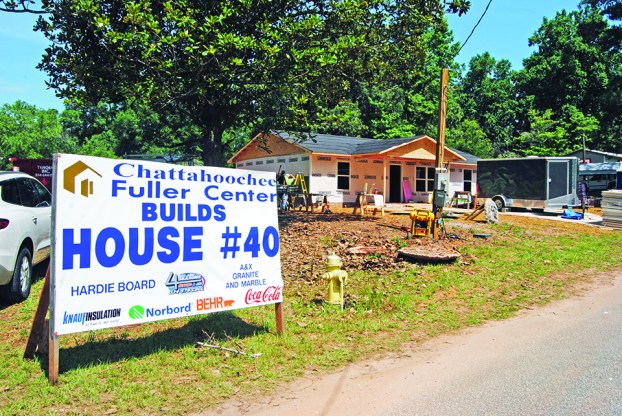 VALLEY — Despite some blistering hot weather, construction is moving along at a fast pace at Chattahoochee Fuller Center Home No. 40, which is going up on 26th Avenue in the Red Dirt Hill neighborhood. A dedication ceremony is planned for 3 p.m. on Friday, at which time new homeowners Rodney and Carmen Lott will be given the keys to their new home and a new Bible.

Starting from a concrete pad at 8 a.m. on Monday morning, the walls were up and the shape of the house had taken place by the end of the first day. It was dried in on Tuesday morning, and interior work has been taking place since then.

The weather has been hot this week — temperatures have soared into the mid 90s – but there’s been plenty of liquids on site to keep everyone hydrated. The good thing is that there hasn’t been rainstorms to slow down the work.

“We’ve had plenty of bottled water, Gatorade and Popsicles, said CFCP Executive Director Kim Roberts. “That has really helped on the hot days we’ve had. We really appreciate local churches like West End Baptist, Refuge Point and the Upper Room Church, for hosting dinners for us each day. Shawmut Methodist, West Point Methodist, and West Point Presbyterian have brought lunch every day. WestRock will provide lunch on Thursday and Sheriff Sid Lockhart will be grilling hamburgers for us on Friday.”

Some of the more skilled workers on the site have come by way of Pennsylvania. They include Barry and Amy Stuck of Middleburg, Pa.; Don, Derek, Grace and Livi Brubaker of Sunbury, Pa.; Sherry and Larry Hess of Freeburg, Pa.; and Tim and Robin Showers of Port Trevorton, Pa.

These are some truly dedicated people in the cause of providing decent, affordable housing for deserving people. The Stucks have come to the Valley on seven different occasions to work on Fuller Center projects. They’d previously worked on projects in Lanett and West Point. They can now add Valley to that list.

On Labor Day weekend in 2009, they took part in building five new homes on North 11th Avenue in Lanett. That was the first-ever Millard Fuller Legacy Build. Appropriately enough, it was in Mr. Fuller’s hometown.

The Stucks have been on work projects in Shreveport and in Minden, La., in Indianapolis, Ind., McDonough, Ga. in Kentucky and other sites in the U.S. They have also taken part in the building of Christian schools in places like Papua New Guinea, Bolivia and Haiti. Barry’s brother-in-law, Don Brubaker, has been to Haiti 14 times on construction projects.

“We like coming to the Valley,” said Barry Stuck. “The people here treat us so well. Over time, we have developed friendships with people like Bill Scott and Monroe and Leslie Smith.”

The Stucks have made 23 trips to 11 different work sites.

“They are amazing,” Roberts said of the Pennsylvania delegation. “They know what they are doing, and we appreciate them so much. We didn’t even have to call them this year. They called us to see if they could help us with anything.”

“There are so many people we need to thank,” Roberts said. “We have between 50 and 55 people on the work site every day. We thank each and every volunteer we’ve had here.”

Local businesses have made much needed donations. Knauf has provided insulation, Norbord the OSB and shingles have come from World Vision, a Texas firm. Hardie Board has provided the paneling for the exterior.