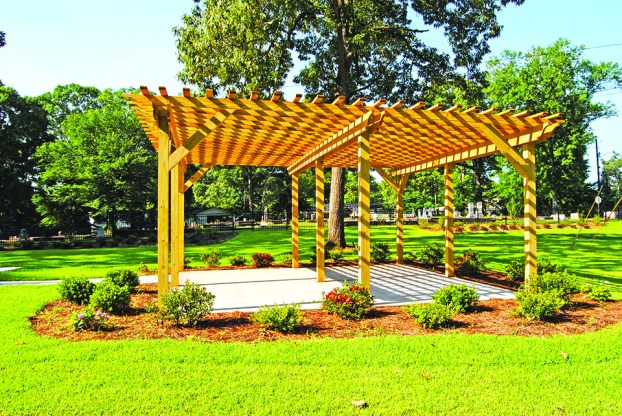 BETHLEHEM CEREMONY PLANNED — A ceremony is being planned for this fall to dedicate the historic Bethlehem Cemetery, located on River Road in Valley. A new historic marker will be unveiled, and some new benches and kiosks will be in place underneath the above pergola. Some new head stones will be in place in the cemetery marking the sites of some newly-discovered unmarked burial sites. There will be a new marker in memory of David Dunlap, whose grave site in Shawmut was recently removed.

VALLEY — On Thursday evening, the Valley Historic Preservation Commission approved certificates of appropriateness for some routine maintenance at two city landmarks – Shawmut Kindergarten and Fairfax Christian Church – and expressed gratitude that a longstanding issue over new windows for the LaFayette Lanier School had been resolved.

Certificates of appropriateness are required for changes in official historic landmark property. Shawmut Kindergarten and Fairfax Christian Church are two of 18 properties in the city that have this designation. Shawmut Kindergarten dates to 1908, the year Shawmut was organized, and the Fairfax Christian Church was built in 1916, the year the Fairfax community was founded.

Both buildings recently underwent some routine painting. There was no change involved in the appearance of either building. The kindergarten painting was done in basic white and West Point Manufacturing Company green – the standard colors for local kindergartens of the early 20th century. The job cost around $7,000.

The church needed some touch-up work and the replacement of some facia that had either fallen down or was loose. The estimated cost was between $500 and $2,000.

Committee members credited an architect from McGee & Associates, Montgomery, Ala. for satisfying their concerns that the new windows at LaFayette Lanier Elementary School would look exactly like the current ones, which date to the
building’s construction in 1936.

“They look exactly the same as the ones that are there now,” said Board Member Jason Williams. “Doing it this way won’t change the appearance of the school. We want to thank Superintendent Dr. Kelli Hodge and the Chambers County Board of Education for working with us on this.”

The window replacements will be taking place during the upcoming fall break, which will be in the month of November.

Board members are reluctant to discard the old windows. Some thought is being given to auctioning them off in a fundraiser.

Board Member Barbara Brooks gave an update on the Bethlehem Church Cemetery project. She said that a historical marker had been ordered and will be going up on the site along with some new benches. The new parking lot is on the site of the former church. Some thought is being given to marking the four corners where the 1873 building sat on the parking lot.

There will be a new grave marker in Bethlehem for pioneer settler David Dunlap, whose grave site near the Valley Pizza Hut was recently exhumed. Those remains will be re interred under a new marker in Bethlehem Cemetery. A kiosk under the cemetery’s new pergola will tell what was known of Mr. Dunlap and other early Chambers County pioneers who lived in what is now Valley.

Mr. Dunlap, who never married, came to the area from South Carolina around 1835-36, He was around 45 years old at the time. He died in 1852 and was buried just off the West Point-to-Berlin Road in what’s now the Shawmut community.

Brooks said that some unmarked grave sites had been found by means of sonar detection at Bethlehem. They will be marked with 12 headstones.

The Commission is looking at having a dedication ceremony at Bethlehem Church Cemetery this coming October. That would be an appropriate time to do it since the original Bethlehem church began having services there in October 1873. The late Donald Williams, who left a substantial sum of money for the cemetery’s restoration, was born during the month of October.

Mr. Williams had wanted the church building to be restored, but the council agreed it wasn’t feasible. It would have easily cost more than a million dollars just to firm up the foundation, and the structure above that was not in good condition.

“How would we use the building even if we could restore it?” asked Brooks.

Brooks said that October would be the ideal month for a dedication ceremony. “If we can work it out, that’s the time of year we’d like to do it,” she said. “The weather’s good that time of year and we’ll have the historical marker by then. It will look like the new one at the hospital.”

The VHPC is working with Alabama 200 for the upcoming bicentennial celebration. The state’s theme is “Sharing Our Story.” Ideas for a local celebration are currently being discussed. The next meeting for the local bicentennial committee will be at 6 p.m. EDT, Thursday, July 12 at city hall. All ideas are welcome.

The demolition of River View Gym is well under way. The roof has been removed and much progress has been... read more