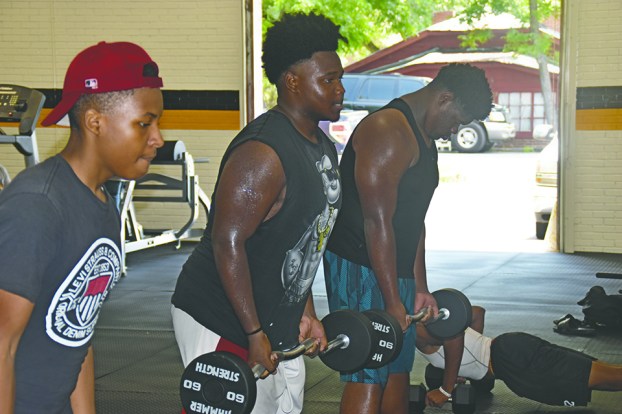 LaFayette sophomore Julius Bullard [pictured center] has been starting for the Bulldogs since his seventh-grade year. His ultimate goal is to play Division I college football. Photo by Rashad Milligan

LaFAYETTE — The Bulldogs of LaFayette High School opened up week two of summer workouts in the team’s new practice facility on Monday.

“It’s been great,” Bulldogs senior wide receiver Me’Kevion Shealey said, sitting inside the facility after Monday’s session. “We’ve got it painted. There are new weights in here, we even have some more weights in the other room. Everybody’s in here, so we’ve been working. Just getting better.”

Shealey and other upperclassmen agreed that workouts have proven to be the most important period of the season.

The upperclassmen have been teaching the underclassmen the importance of not “cheating” the offseason workouts and giving it all they have every day during the summer. The last two seasons, LaFayette has lost in the second and third round of the state playoffs to Fyffe High School due to fatigue, they admitted.

The new workout facility is 60×40 feet, which is twice the size of the original practice facility.

“It’s been very good for us,” LaFayette head football coach James Lucas said. “It’s very spacious, so everybody gets an opportunity to get into the routines all at once. With the help of the coaches and the volunteers, everybody gets to be in one building at one time.”

With the added space, Lucas was allowed to invite a pair of former college football players from the University of West Alabama and Stillman College to assist with the current Bulldogs’ weightlifting efforts. One of the main reasons why Lucas decided to become a coach is to help the student-athletes earn an education with a football scholarship, he said.

“They understand what it takes to get the kids to the next level,” Lucas said. “They’ve been doing a fantastic job of running the weightlifting program so far.”

Making the new facility possible came from a healthy share of donations from the public, according to Lucas, who’s heading into his eighth season as the head coach at LaFayette.

“The community gave us a new weight room,” Shealey said. “They gave back to us, so now we’ve got to give back to them. We’re going to give them a state championship this year.”

The Washington Capitals ended not only a franchise but a city-wide drought of 26 years without a championship on Thursday... read more