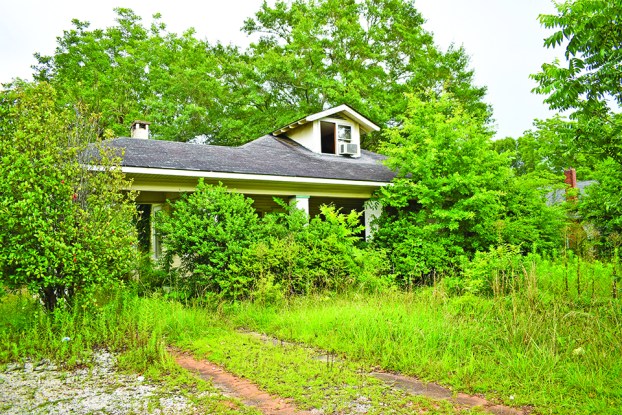 OVERGROWN: Because of all the brush, foliage and weeds, this house was declared a nuisance by the LaFayette City Council.

The property in question was owned by a Maquella L. Jones, and sits at 216 LaFayette Street N, just a few blocks from the council chambers. Knee-high grass and weeds make up the front yard that leads to a porch that is almost completely hidden by overgrown brush, trees and weeds. The windows of the top floor of the house are out, and it has the appearance of being uninhabited for a long period of time

The council wanted to deem the house a nuisance, which would allow the city to assume responsibility for the upkeep of the property that is not being handled by the owner. All cleanup costs accrued would be billed to the owner upon completion.

City police tried to contact the owner through several different methods prior to the hearing.

Sergeant Quantavious Lockhart of the LaFayette Police Department testified before the council and to city attorney Joseph Tucker about the issue, stating that he had posted a notice on the front lawn two weeks before. Notices were also sent through the mail to the owner’s last known address, only to be sent back with “return to sender” labels.

“I saw overgrown plants on the property, weeds all around the house that were over the length that we put in the documents, weeds on the house. It just looked dilapidated,” Lockhart said.

He presented photos of the house to the council to give them an idea of how bad the overgrowth was before making a recommendation that they deem it a nuisance.

The public hearing then ended with no actions made, but at the end of the regular council meeting a unanimous vote on Resolution No. 2018-06-25-01 officially declared the house a nuisance.

Other meeting actions referenced the recent boil water notice that was lifted from the city. Although the water system is now under control, the city will be flushing it for the next two to three weeks, according to Interim Water Distribution Superintendent Richard Chapman.

Councilman Williams was concerned with public awareness on the issue and wanted to take more action in that regard.

“We should be knocking on doors and letting people know,” she said.

The council made plans to broadcast warnings over radio stations and in local publications to get the word out.

One injured in West Point shooting