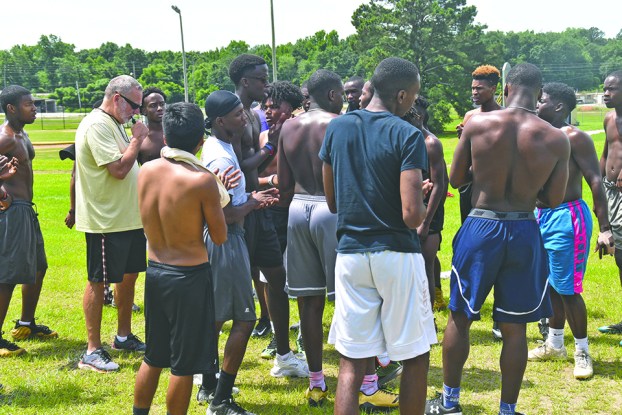 Lanett football focuses on being ‘elite’ in workouts

The team was split into two groups with each group maxing each other out in the weight room for about 40 minutes before heading outside to the practice field to run suicides for another 20 minutes.

“It was a good day,” Lanett offensive coordinator Chip Seagle said. “They’ve done really well with the conditioning both days. We ran them pretty well on Monday and today [Tuesday] they came back today. We have 47 kids and we’ve had about 40-something kids show up both days. The ones who weren’t here, we know where they were.”

The first group wrapped up their session running on the field as temperatures began to rise outside into the 80s. Senior tackle A.J. Jackson hyped up the unit as they prepared to run again by telling them that champions work hard. The first group ended up running another suicide just because they wanted to.

A few minutes later, the second group of the day piled into the 20×30 foot weight room ready to get to work. Older players greeted the younger students who were already using the weights before beginning themselves. Teammates spotted one another at different stations of power cleaning, squatting and bench pressing.

The players alternate using the weights since the day only focused on maxing. On the typical workout day, the players will have in-between lifting to do. Inspirational quotes and team sayings cover the walls as coaches encourage the athletes to push themselves even more. No athlete was exempt from being called out by the coaches during the session, including senior receiver Tifton “Dee” Dobbs or the nationally-ranked athletes Kristian “Ken-Ken” Story and Trikweze Bridges.

As the players began to slow down at the end of running suicides in the rising heat closing into noon, Seagle reminded them that they weren’t giving an elite effort.

Lanett was a part of a Quad-Spring scrimmage last month at Beauregard and was part of a 26-20 win. In last year’s championship season, the Panthers posted a 15-0 record. Lanett’s first game of the 2018 season is on Aug. 24 against Valley High School.

VALLEY — The Point University Tennis Camp began on Monday morning at the university’s courts at the Valley SportsPlex. There... read more