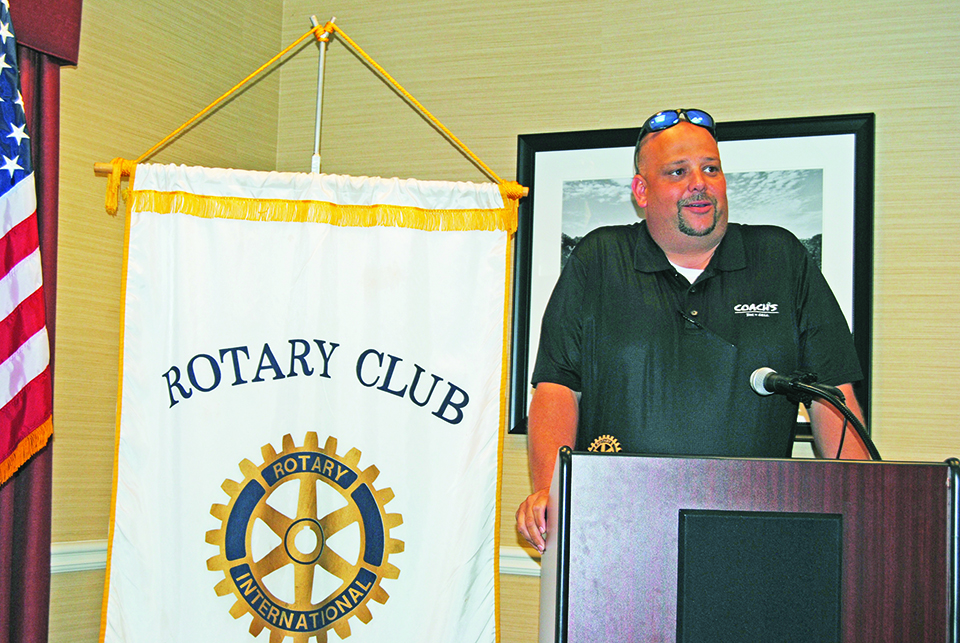 TALKING DOWNTOWN — On Thursday, Matt Livingston was upbeat while talking about the business climate in downtown West Point. It’s a pretty lively place right now with a good bit of the activity coming from people who live outside West Point and the Valley area. Livingston said there’s a vibe in the downtown area that people both far and wide like.

LANETT — Not too many years ago downtown West Point was all but a ghost town with a only a handful of active businesses on West 3rd Avenue. It’s a lot different today. Spurred on by Kia and Point University coming to town, downtown West Point is a lively place these days. There’s lots of good restaurants to choose from for that next meal. The biggest drawback is trying to find a parking place.

Matt Livingston, who owns some of those restaurants, was the guest speaker at Thursday’s noon hour meeting of the West Point Rotary Club and talked about the transformation that’s been going on.

“If you’re in downtown West Point on Friday or Saturday night there’s a vibe about the place, no doubt about it,” he said. “There’s a lot going on. It’s not like it used to be. People are everywhere and bands are playing.”

A good portion of the crowd is local people and many are Point students but a growing number of those who frequent downtown West Point are from out of town. They like it here and come back on a regular basis.

“We did a survey at Coach’s not long ago and found that 40 percent of people who came there that week were from out of town,” Livingston said. “We have people coming here from Franklin, LaGrange, Opelika-Auburn and Columbus. We’ve had campers on West Point Lake from places like Atlanta who tell us that they love downtown West Point. That it’s a clean, safe place.”

Livingston said that West Point is now seen by many as a food destination.

“There are multiple restaurants, a lot to choose from and people are coming back,” he said. “Joe’s Tex-Mex is a good addition. There’s competition between businesses, but it’s good competition. The restaurants complement each other and help draw people downtown.”

The popular chain Momma Goldberg’s will soon be in West Point. It’s going to go by the name Momma G’s to appeal to the younger set but will have the same menu that made the original Momma Goldberg’s so popular. Railroads, which was housed at the Momma G’s location, has moved to a new location down the street and specializes in ice cream.

Livingston is planning to have a big new restaurant on the same side of the street. It will be next to Joe’s Tex Mex in the former Bazaar store. It’s going to be known as the American Smoke House, or ASH for short. It will seat up to 320 people.

“It will be a bit rustic but nice,” said Livingston. “It will be a little on the high-end side. We’ve gotten the Henry Hudson Flooring Company (in the former cotton warehouse on River Road) to refurbish the wood for us. The Bush brothers do a great job and it looks really nice.”

As the name gets across, all the meats in the American Smoke House will be smoked. It will be done in what’s most likely the largest kitchen in Troup County on a giant smoker that can handle up to 275 Boston butts or 325 chicken halves at a time.

“We will finish the meats on a char broiler to give it that cooked meat look,” Livingston said.

Livingston is a guy who’s used to wearing lots of hats. In addition to being a restaurant owner, he’s also the city’s building inspector. For a long time he was an assistant football coach at Springwood School.

He said he got the idea of having separate businesses for ice cream and hot dogs on a visit to Young Harris College in north Georgia. “They had a hot dog stand and an ice cream shop side by side,” he said. “There were long lines at both.”

“West Point is a good place,” Livingston said. “I am glad to be here. We’re going on two years at Coach’s, and it’s still doing well. Six months ago we decided to change over Railroads into an ice cream shop and to bring in Momma G’s. They will open on June 11.”

Tyler Damiano will be the general manager for all three restaurants and will run them on a daily basis. Leslie Hinkle, a Chambers Academy graduate who played softball for Point University, will manage Momma G’s and Toby Spradlin will run Coach’s.

“Right across the street from Coach’s, Cam Tramell is doing a good job for us
at Railroads,” Livingston said.