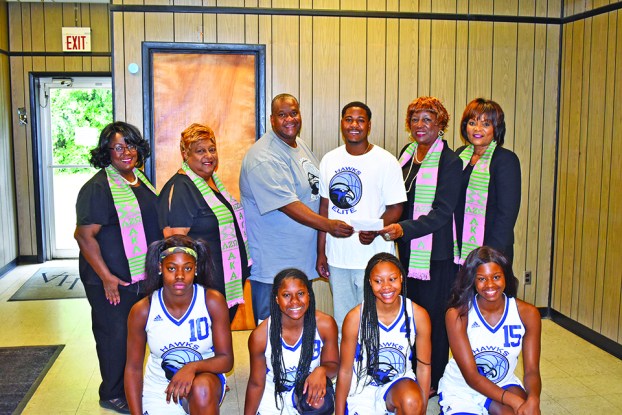 Both the Lambda Zeta Omega graduate chapter of Alpha Kappa Alpha Sorority and the Qui Vive Civic Club donated money to the Lady Hawks Elite basketball team that will go towards their many expenses while traveling to different games.

“We will take this donation and use it toward a sponsorship,” said Head Coach Alvin Jackson. “We are getting ready to go to Louisville, Ky. first where we will play in the Battle of the Borough. We are giving these girls exposure to play so this donation will help fund some of the lodging, transportation and food for the players.”

The Alabama Hawks program is entering its 13th season of “training girls to be productive citizens using the vehicle of basketball to build and sustain” values like teamwork, respect, character and integrity.

Because of this dedication, Lambda Zeta Omega and Qui Vive made their donations to support the cause.

Lambda Zeta Omega gives time and money to causes like these all the time. Since they were chartered in 1976, they have provided Greater Valley Area college-bound students with scholarships, supported schools like Valley Haven and Valley High School and give to the Domestic Violence Intervention Center, Boys and Girls Clubs of America, West Point Cares youth program and many others frequently.

The Qui Vive Civic Club does similar philanthropy throughout the area. Giving donations to Valley Haven, scholarships to “deserving” high school graduates and providing outreach to other parts of the community, the club accepts “anyone who wants to help in the community.”

“We donate to groups like the Alabama Hawks because it is a need and we want to let young people know that we are behind them,” said Corinthian Woody of Qui Vive.

The Lady Hawks Elite will be using the donated money to attend the Battle of the Borough in Louisville, Ky., a collegiate tournament where over 100 college coaches will be recruiting from.

The main goal of their program is to make college possible for the girls by helping them obtain scholarships through their high level of play.

Later in the year, the Lady Hawks Elite will be participating in the Battle of the Bayou in New Orleans and The National Championship in Atlanta.

WEST POINT — Orange and white balloons and the smell of fresh steamed sandwiches welcomed the crowd of people who... read more