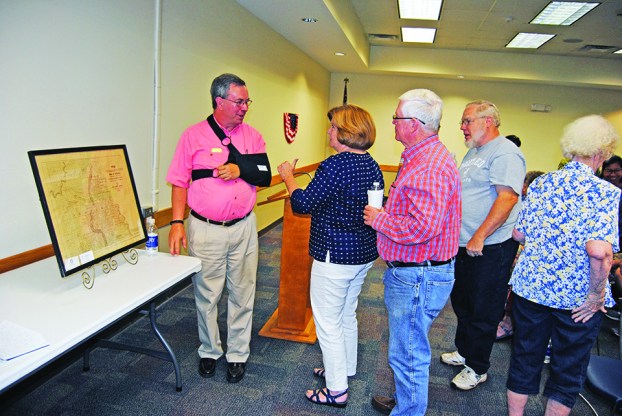 TALKING CHAMBERS COUNTY HISTORY — A large crowd was present at Friday’s Lunch N Learn program at Bradshaw-Chambers County Library. They came to hear District Court Judge Calvin Milford (at left) talk about the history of Chamers County; “As citizens of Chambers County you have lots to be proud of,” he said.

VALLEY — It’s widely known that the state of Alabama will be celebrating its 200th birthday in 2019, but something that’s not so widely known is that nine counties along the state’s eastern border with Georgia weren’t a part of the state when Alabama was admitted into the Union in 1819.

Chambers County District Court Judge Calvin Milford talked about this at a Lunch N Learn program Friday afternoon in the Lanier Room at Bradshaw Library. An unusually large crowd came to hear Milford talk about the history of Chambers County, the place where his family has lived for six generations.

Milford joked about a bad experience he’d recently had. With his left arm was in a sling, he told the crowd that he was a guy too old to play in the mud but that had happened recently when he fell down and broke his collar bone while doing a favor for his daughter.

It didn’t deter him for making a well-received presentation.

When Alabama became a state almost 200 years ago, the part of the state that includes Chambers County was reserved for the Creek Indians by the Treaty of Fort Jackson. Noting that it looked like a carved-out circle on a map, Milford said that it was an unrealistic expectation for the settlers to avoid the area. “The quality of the land was too good,” he said.

With problems cropping up with settlers coming in, the Creeks wanted another remedy and got it with the 1832 Treaty of Cusseta. This provided for a survey and for the land to be divided into sections, townships and ranges. Designated sections and half sections of land would be reserved for the Creeks with other land opened to settlement.

Unaccustomed to the ways of the white man, Native American land owners were often cheated out of their land, many times by signing something they didn’t understand after downing a jug of corn whiskey.

With signed paper in hand, a settler looking for land had something he could present to the sheriff and the local militia to move that Indian off their land.

Milford said that the Chambers County town of Stroud was named for a man named Ethan Stroud, who was quite skilled at stealing land away from Indians. At one time, it’s thought that he owned or controlled over 32,000 acres.

The Creeks lost again and were sent westward on the Trail of Tears.

Two important trails bisected Chambers County during the time the county was created in the 1830s. The Oakfuskee Trail came in from the north and the Chapman Trail from the east. They crossed near the middle of the county. Early settlers called it Buffalo Wallow after an effigy of a buffalo that had been dug into the ground by Indians.

In the early 1830s this became the most populous place in what would become Chambers County. Milford’s ancestors arrived around this time. They were silk farmers and brought silk worms with them. “I still have some of the thread they made,” he said.

Settlers coming in along the Oakfuskee Trail were coming from Tennessee for the most part and those on the Chapman Trail were from South Carolina.

Chambers County, said Milford, was created by the Alabama Legislature on December 18, 1832. It was named for Henry Chambers, a U.S. senator from Alabama who had died a few years before. “He had probably been in the area that’s now named for him,” Milford said. “He was the field surgeon for General Andrew Jackson in the first Creek War.”

“The county was created at the home of Baxter Taylor, several miles east of the present-day city of LaFayette,” Milford said. “He was a retired Army captain at the time.”

The first county officials were named and the first grand jury impaneled. “They indicted one of their own on a charge of selling whiskey to the Indians,” Milford said to some laughter.

The men at that meeting decided to put the courthouse as close to the exact center of the county they could locate. They wanted it on the top of the drainage divide that splits the county. U.S. 431 travels on top of this divide today. Because of this, there are no bridges over creeks from one end of the county to the other.

The settlement that grew up was first called Chambers Court House, later Chambersville and eventually LaFayette. Milford told an interesting story of how the first courthouse was built. It was financed through the sale of land lots, thereby avoiding a need to take on debt. There was a big auction with barrels of whiskey being brought in to help expedite the process.

“Many a man woke up the next morning,” reads an account of the proceedings, “with a headache and a deed in his pocket.”

That’s how Chambers County got the first courthouse built in Alabama without financing.

It was a crude log structure that was replaced in a few years with a two-story brick building. A large picture of that second courthouse is on display inside the current courthouse foyer. That photo was taken in March 1899. The building was torn down, the site cleaned up and a new courthouse built and opened to the public prior to Jan. 1, 1900.

“It’s amazing they could do that in that amount of time,” Milford said.

It’s widely believed that the county seat was pronounced La-FEE-et when it was first named. The pronunciation was changed, Milford said, thanks to famed frontier writer Johnson Jones Hooper, who was the editor of the East Alabamian in LaFayette in the 1840s.

Hooper had a big following. People loved his stories on such characters as Simon Suggs, Kit Kunckerers and Daddy Biggs. Suggs was something of a scoundrel and told everyone he was from a place called La-FATE.

One person greatly influenced by Hooper’s writing was Mark Twain.

“He had a lot of influence as a newspaper editor,” Milford said.

Milford said he liked the term “The Reason for the Tears” author Bobby Lindsey had for Chambers County’s role in the Civil War: It was both the cradle and the grave.

That’s because the county had the first troops mustered into the Confederate army and was the setting for the last fort to fall. The LaFayette Guards were the first to arrive in Montgomery for service to the Confederacy. On April 16, 1865 Fort Tyler, on the Alabama-Georgia line, fell to Union Calvary after an all-day battle.

“After the war, the textile industry developed in Chambers County,” Milford said. “In August 1866, cornerstones were laid at what would become Langdale and Riverdale mills. Textile mills were big draws. People moved close to them to find work.”

The mill companies built homes, stores, schools, churches and recreational facilities for the mill families. “The population center shifted from the middle of the county to the Valley,” Milford said.

The town of Bluffton was chartered in 1865 and changed its name to Lanett some 30 years later, the name coming from two mill company officials, LaFayette Lanier and Theodore Bennett.

Milford said that the county is undergoing a transition in the current period. With textile jobs being outsourced to cheap labor markets, more and more county residents are working outside the county.

Milford talked about some famous people with Chambers County roots. Pat Garrett, the New Mexico lawman who is famous for killing Billy the Kid, was born in Cusseta in 1853. Famed 19th century evangelist Sam Jones was born in Oak Bowery. He’s often been called the Billy Graham of the 1800s. One of his converts was a retired sea captain from Nashville, who wanted to build a huge auditorium for Jones to preach. “The Ryman,” as it’s often called, would later host the Grand Ole Opry.

Chambers County’s most famous native son, boxer Joe Louis Barrow, has a statute on the west side of Chambers County Courthouse, just off heavily traveled 431.

“We have lots to be proud of in Chambers County,” Milford said. “We’ve had an interesting history, and I’ve enjoyed talking to you about it today.”

Milford lingered a good while after his talk, answering lots of questions that were posed to him.

SMITHS STATION — Multi-sport athletes in the Greater Valley Area took a break from summer workouts to get some time... read more