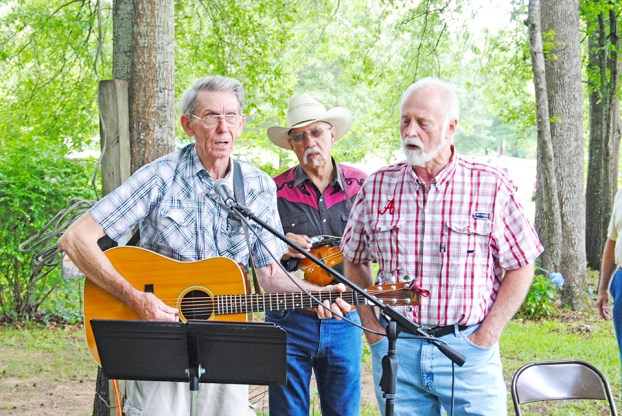 SINGING BY THE RIVER– Owen Gray, Freeman Parker and William Harry sing “Amazing Grace” at Tuesday’s Day on the River in Valley. Approximately 50 local men were there to celebrate the 15th anniversary of Bobby’s Backyard Brotherhood.

VALLEY — More than 50 men gathered on the banks of the Chattahoochee River Tuesday morning to celebrate the 15th anniversary of Bobby’s Backyard Brotherhood, an interdenominational  prayer group that seeks comfort for those who are ill, for the bereaved and those in harm’s way due to their military or law enforcement service.

In recent years, the June anniversary of the Brotherhood has been marked with a celebration in a beautiful riverside setting not far south of the Langdale Dam. “We want to thank Billy Sides for allowing us to meet in this riverside setting,” founder Bobby Elliott said.

The Brotherhood began on June 3, 2003 when Elliott and close friends Richard Perryman, Charles Hall, Handley Davis and Bo Royal started a small prayer group in Elliott’s backyard shop. Word spread about what they were doing and prayer requests started coming in from all over.

Other men of faith asked to join them for the prayer sessions and pretty soon, the new Brotherhood outgrew the shop building.

The Tuesday meetings shifted to the Langdale Congregational Christian Church, where Elliott is the pastor, and the membership continued to grow. On Tuesdays, there’s usually around 40 men from many different churches who meet there and mention names that go to a long list of individuals and families that are being prayed for.

“We give thanks to all of those who have supported us and pray that God will continue to bless our growing group as we offer prayers to those in need,” Elliott said.

On the annual Bobby’s Day on the River, Sheriff Sid Lockhart and his crew are there to cook a catfish dinner with all the trimmings for a crowd of up to 60 people.

This year they introduced a new tune they’d written in celebration of the Day on the River. “Come on down and join us,” goes the chorus. “All you will find is love, Like what’s from above, Friendly men gathered in His name.”

Williams is best known for his fame in country music, but he’s also known for writing more than 100 gospel songs including such classics as “I Saw the Light.”

The group also did really good versions of “The Old Country Church,” and “Amazing Grace.” Gary Harris did a jazz-style trumpet solo of “God Bless America” and the singing portion of the program closed out with William Harry singing solo on “The Lord’s Prayer.”

Elliott quoted from Second Corinthians  13:11 – “Be of good comfort, be of one mind, live in peace, and the God of love and peace will be with you.” He asked everyone to remember in prayer three members of the Brotherhood who died during the past year, Don Clark, Bill Bohler and Herbert Smith.

Elliott thanked the Lord for the Brotherhood extending for 15 years.

“You have done great things for us,” he said. “We praise you and thank you for bringing this group of Christian men together and being our strength. I pray that in the days that lie ahead we may be used by you as a witness to the wonderful work you have done in our lives and that we may be used to encourage others.”