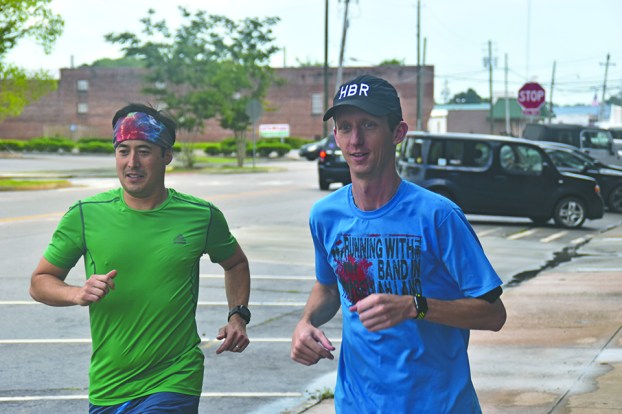 WEST POINT — The new running group in the Greater Valley Area is serious.

Even on a rainy Thursday afternoon, Phil Tranqui, Jeremy Powers and Benji Mitchum are still jogging in place outside of Chattabrewchee waiting for their timing watches to sync.

Tranqui echoed Mitchum’s outlook on the outside conditions before taking off.

“Rain cools it off actually,” Tranqui said. “It’s probably dropped five degrees now because of the rain, so we don’t mind the rain. All three of us ran in the snow around Christmas.”

The group has only been running together on a few occasions now but this week’s trio has already gotten to know one another. Tranqui and Mitchum jokingly pressed Powers about catching up with the rest of the group shortly before the run started while Powers explained that he needed to clear data on his watch in order for it to sync.

Another group casual, Chattabrewchee co-owner Michael Denehy, was occupied this Thursday with a previously-scheduled event. Denehy and his wife Kathy are endurance athletes themselves and Denehy has said he is training to participate in an Ironman Triathlon for his 46th birthday on Sept. 29.

As for Thursday’s trio, the men have been running for several years.

“There’s something about running, I think you either love it or you hate it,” Tranqui said. “It’s a love-hate relationship, I think. Sometimes, we’re out there running and we hate it. Then, you come back from a long run and you feel great so it’s a good way to burn calories. We love races, we share the pain among each other, we sign up for these crazy races that are crazy long distances and we just do it.”

Some of the “crazy long distances” Tranqui referred to include 100-mile races, which are typically completed in under 30 hours.

Thursday’s group of runners said that Powers is the fastest runner, Mitchum usually finishes first among the group and Tranqui is the most competitive. The trio joked that they felt like they could still beat a couple of local high school cross country runners on a good day.

The running group meets every Thursday around 6:20 p.m. at the brewery. After an approximate 3-mile, 30-minute run filled with hills, the runners return to Chattabrewchee for a beer and the new addition with a night of trivia.  Denehy and the group are always encouraging other runners to join every week, whether in the rain, sleet or snow.

WEST POINT — When Michael and Kathy Denehy opened Chattabrewchee in the latter half of 2017, they didn’t do so... read more