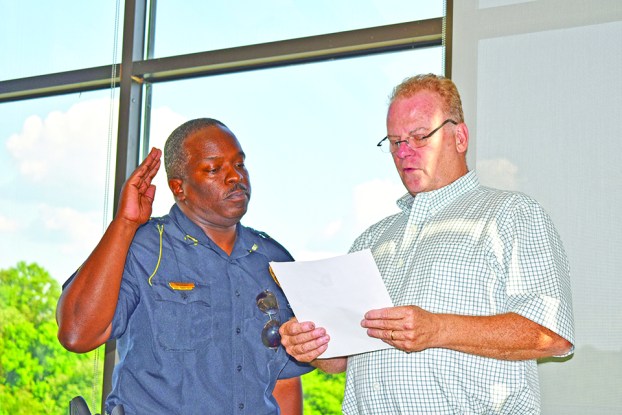 Donald Britt, West Point’s new police chief, was sworn in by Mayor Steve Tramell in front of the council chambers.

“Let me begin by saying how happy we are that you’re here and I hope you have a long tenure with us, a long and peaceful tenure,” Tramell said before the swearing in.

Britt is a 27-year law enforcement veteran and was chosen for the position by a unanimous council vote in April. He has a B.S. degree in criminal justice from Albany State University, received an MPA in justice administration from Columbus State University and previously completed a professional management program at the Georgia Law Enforcement Command College at Columbus State.

“I’m appreciative and humbled to be selected as chief of the City of West Point,” Britt said. “I look forward to working with the men and women and citizens of the city. It’s going to take all of us here and our citizens to help make the city better. We can’t do it by ourselves no matter who the chief is. We are all one team and I look forward to your input.”

Thursday’s meeting also saw the recognition of Lady Storem and West Point’s CARES youth center. For six years now, with the help of Storem, the youth center has performed plays that teach life lessons. The past year’s production focused on anti-bullying.

Mayor Tramell handed out award plaques to the elementary school student actors for their time at the youth center and their acting prowess.

“I want to thank the City of West Point for giving me this opportunity,” Storem said.

The entire council congratulated the actors and thanked the youth center for putting the plays on for the past six years.

“If you haven’t been to one of these plays, you need to make sure you can get to one because they tackle real issues that we have in our communities and our country,” said councilman Henry Hutchinson. “This year they did bullying and we all know that that is a big thing among school kids and adults as well. It had a real message.”

Hutchinson and the rest of the council expressed their desire to have the plays continue, have more students performing in them and to find them a new performance venue to accommodate more people.

In other meeting actions, the council discussed the necessity for Tree Board members and a slight change to mobile food vendor ordinance that will be discussed further in future meetings.

“With industrial sites operating late night and having lunch at two or three in the morning, 8 a.m. to 10 p.m. will not work with those hours of operation,” said City Manager Ed Moon.