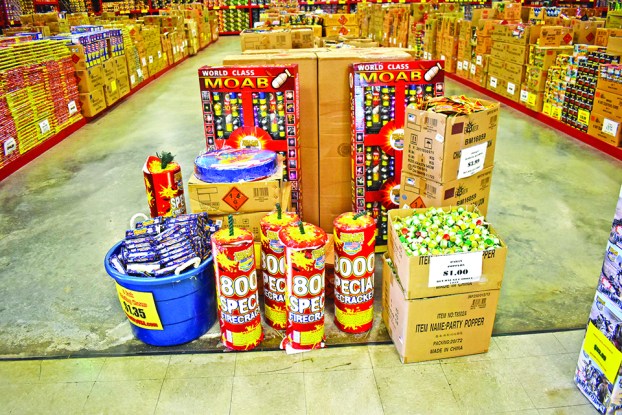 EXPLOSIVES: Fireworks are a staple of the Fourth of July, and Boom City USA has all kinds

CHAMBERS COUNTY — With summertime finally heating things up and the Fourth of July just around the corner, people around the Southeast will be driving down the highway keeping an eye out for the big buildings selling all kinds of things that go “boom.”

Fireworks are a staple of warmer month celebrations and while they are undoubtedly a spectacle for the masses, they can be cause for concern for area police and fire departments.

“We want people to have a good time,” said Chambers County Chief Deputy Richard Carter. “The Fourth of July is special, it’s definitely an occasion, but we want to make sure people are staying extremely safe.”

Staying safe with standard consumer fireworks can be as simple as following the government-regulated instructions on the label and being sure to use one’s head.

“A little bit of common sense goes a long way,” Valley’s Boom City USA Manager Marsha Pickens said. “As long as you have some common sense you shouldn’t have a problem using the fireworks.”

When talking to officials about how to stay safe during celebrations, common sense was a common thread. Only allowing those old enough and in the proper state of mind to handle the explosives was a close second.

“We encourage people to use caution, use common sense and most of all don’t let minors use the fireworks. We see that a lot,” said Lanett Fire Chief Johnny Allen. “Most of the incidents we have come across involve underage people using them wrong, without supervision and not following the instructions.”

Even with supervision, those under the influence of alcohol can cause problems as well.

“Alcohol and fireworks are like alcohol and firearms,” Carter said. “They don’t match and they don’t go together. A lot of people like to drink on the Fourth of July and that’s fine, that’s their business, we just don’t want someone getting needlessly hurt.”

With the appropriate person holding the lighter, safety comes down to their awareness of the area around them.

“Sometimes people don’t realize where they are when they’re shooting fireworks off and they don’t see it could be a pine thicket or whatever where they come back down,” Carter said. “We want them to know what’s around them, know who’s around them and when they are shooting off their fireworks make sure to follow the directions on the labels. Just be responsible.”

Shooting off fireworks for the Fourth can make for a fun, unforgettable experience for families and friends. With a little attention to instructions, it can be a safe one too.

“It’s such a great holiday and a great time to celebrate,” Pickens said. “People love doing fireworks and the ones today are just so easy to use. All you have to do is have a level surface, be 200 feet away from buildings and you’ve got a beautiful show.”