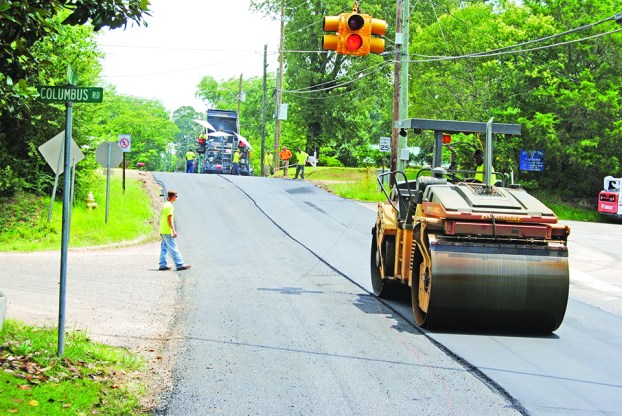 COMING THROUGH THE CROSSING — Paving crews have been doing some much-neede work this week along California Road in River View and River Road, which heads toward Fairfax. Early Thursday afternoon, they’d gotten to McGinty’s Crossing, where the two roads meet. Approximately two weeks after the paving is done, the roads will be striped.

VALLEY — A long-awaited road paving project is under way in the city of Valley.

A seven-mile stretch of road between Trammell Block in Fairfax and School Street in River View is getting some much-needed surfacing this week. The resurfacing of both River Road and California Road was delayed due to some pipe installations that were being done on these two roads by the East Alabama Water, Sewer and Fire Protection District.

With East Alabama finishing the work along California Road first, that road was the first to be resurfaced. On Thursday, the work had proceeded across McGinty’s Crossing onto River Road, heading toward Fairfax. At the same time, East Alabama was finishing up on some pipe projects near Sue’s Chic.

“We are doing around $1.5 million in paving work this summer,” Mayor Leonard Riley told The Valley Times-News Thursday afternoon. “That’s more than we usually do. River Road was close to failing. It’s been an expensive process. We had to do some extensive patching work before we could put down the PermaFlex.”

The work is being done this summer by Chris Clark Paving & Grading, Lanett, and a sub-contractor, East Alabama Paving, Opelika.

The resurfacing of California Road and River Road is something that’s been a long time coming for those who drive these two roads a lot. Both had rough, bumpy surfaces in places. When the paving work is done in a few days, it’s going to be a smooth ride all the way from Trammell Block in Fairfax to the First Christian Church in River View.

These roads will be striped in a couple of weeks.

“The asphalt needs to cure for two weeks or so before the striping can be put down,” Mayor Riley said. “We will continue to address infrastructure needs every year. We had more to do this summer than we normally do.”

In addition to the River Road-California Road stretch, several other streets in Valley got some much-needed resurfacing. These include portions of 55th and 56th Streets in Langdale, 23rd Avenue (the part of old Highway 29 where the Little Brown Jug once stood) and a portion of 29th Boulevard in Shawmut.