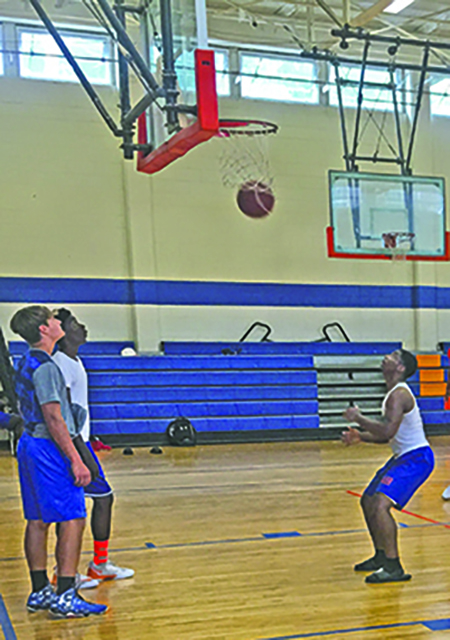 EYES ON THE PRIZE: A pair of Valley High School watch a teammate successfully lay in a ball during practice on Tuesday afternoon. Photo by Rashad Milligan

The Rams came into the summer with head coach and assistant football coach Marshon Harper planning to give the team the same workouts that the football team was doing. Workouts and drills like flipping tires and ladder agility drills were a couple of examples Harper previously said he wanted to use to get the younger team in shape for the season. The team is replacing seven seniors who graduated last month.

At last week’s Play Date at Smiths Station, the Rams ran Bullock County out of the gym with many fast break buckets and layups in transition. However, in many half-court sets, Harper told Valley from the sidelines to move the ball and space the floor better.

After an hour of conditioning drills during Tuesday’s workout, the team headed to the basketball court, where they spent a majority of the afternoon.

For about 30 minutes, Valley worked offensive set plays with Harper. The team began to grasp a lot of the concepts after multiple reps.

The first game featured a lot of the stars from the Varsity team. Sophomores Kintavious “Kin Kin” Dozier and Jacquez “Quez” Trammell stood out among the pack. Each game was shirts versus skins. Dozier was on shirts’ squad and Trammell was with the skins for the first game. The shirts isolated a lot on offense, there was minimum ball movement and Dozier’s game resembled James Harden’s low-sweeping moves. The skins grabbed the majority of rebounds during the scrimmage, ran on offense and shared the ball more than the shirts.

The second scrimmage followed with the B-Team coming onto the floor. Ten members of the B-Team split in half again, shirts versus skins. Trammell drifted off into the right corner of the gym and began shooting on another basket during the second game with the even younger players. The scrimmage featured many turnovers and the race to 16 lasted longer than the first scrimmage, going no longer than 20 minutes.

Teammates on the sideline told jokes or bounced a ball to pass the time until they returned to the floor themselves. Some of the athletes grew restless and occasionally wandered outside of the gym or in the hallway while waiting to play again. The scrimmages continued non-stop for over an hour on the Rams’ home floor.

The Valley boys Varsity and B-Team head to LaGrange for a Play Date on Thursday.

Softball Camp on deck for Springwood