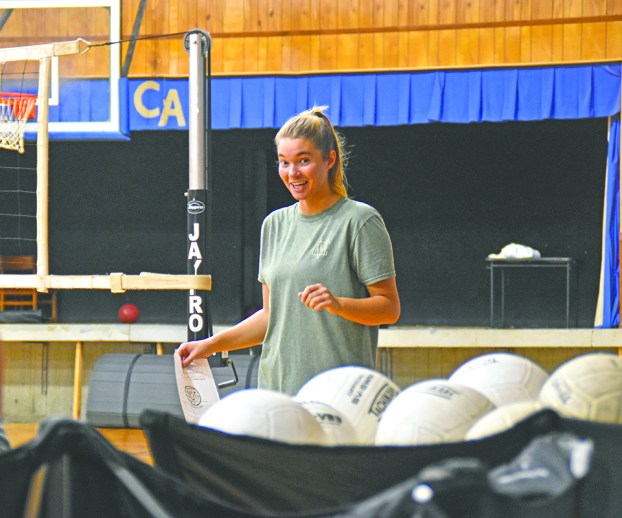 Reynolds has wasted no time getting to work, as she’s already hosting open court workouts for volleyball players every Tuesday and Thursday at the school. The new coach, as well as an assistant, led the athletes through drills, focusing on serves and blocks. A trio of players stayed with Reynolds after the 90-minute workout to improve some more in the humid gym, which was accompanied by a large fan toward the back doors.

“I’m very excited,” Reynolds said after Thursday’s session. “It’s been probably about two years since I’ve been on a court playing, so I’m very excited to be back coaching and passing my knowledge to this new generation of girls.”

Reynolds played with the intramural volleyball team at Troy before graduating with a Chemistry degree in 2016. She was also a line judge during the Trojans’ volleyball matches. The last time she officially played was at Pike Liberal Arts School while playing with a travel team in Dothan.

Reynolds makes an effort to make sure the team prays before and after every open court session at the Christian school. Choosing a faith-based institution was an important priority for her as she was choosing a school to work at, she said.

Reynolds motivated the girls to encourage each other during the workout and took athletes aside to give them tips on how to hit the ball with more impact in future scenarios. Middle blocking and spot serving are two areas on the court of expertise for the 5-foot-10 Reynolds.

“I’m very excited to just pass [my knowledge] on and hopefully inspire these girls, get them to go where they want to in volleyball and in life in general,” she said. “I feel like we’re going to be a pretty tight-knit team so I’m hoping to not only mentor them on the court but also in life.”

Reynolds is originally from Dothan, before moving to Troy in high school. After graduation, she worked as an actress on productions in Atlanta. She worked on “The Divergent Series: Allegiant,” “Alvin and The Chipmunks: The Road Chip,” Discovery Channel’s Manhunt” and “Tyler Perry’s Boo 2! A Madea Halloween.” Reynolds doesn’t mind if the team finds out about her career in front of the camera.

“I don’t necessarily bring it up all the time because then all of a sudden that’s all anyone wants to talk about,” she said.

Chambers is still new to Reynolds, as she’s still learning the daily ins-and-outs of turning off the lights in the school gym and knowing the team’s full fall schedule but the coach is looking forward to her new home in the Greater Valley Area.

Fresh-faced Beulah Bobcats discovering how to play on Varsity level

OPELIKA — A Loachapoka forward drove alongside the baseline against the Beulah defense on the right side of the basket... read more