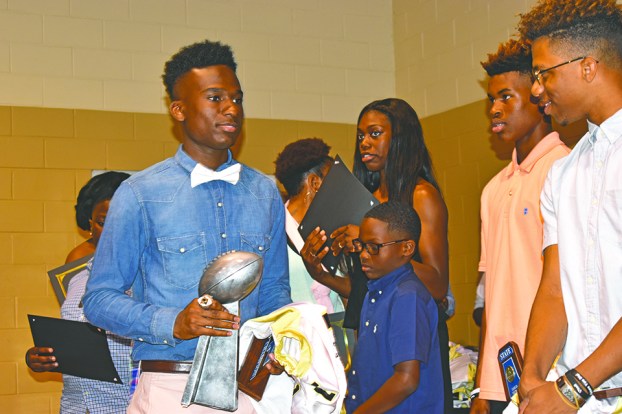 LANETT — Jaren Ross was only four years old when his grandmother noticed he was gifted.

Before sitting through a day school, Ross’ grandmother Pearlie Gibson said that she once forgot how to spell “Buccaneers.” The four-year-old Ross then wrote out the word and showed his grandmother. He remembered seeing the word before.

“That has to be one of the most popular stories my grandma always tells,” Ross said, laughing. “But it just gives me a sense of pride to know that ever since a young age, I’ve been blessed by God with a great ability to capture whatever I see and retain it in my memory. I feel like being able to spell a long word at a young age was a sign of my blessing to know that in the future I’d be able to do great things.”

Ross developed a passion for sports as a kid growing up watching Michael Vick, Kobe Bryant and LeBron James. He was also four years old when James was drafted into the NBA in 2003, who just played in the NBA Finals last night. In football, Ross said that his game mirrored Richard Sherman’s, a Stanford graduate and former all-pro cornerback in the NFL. Sherman wasn’t only known for his play on the field, but the stances that he has publicly taken off it as well. He’s been an outspoken advocate against the social injustices in America, just like Ross has. This past MLK Day, Ross performed an excerpt from a Martin Luther King, Jr. letter that he wrote while incarcerated.

“I’ve always stood by the standards of God created all men equal,” Ross said. “Therefore whatever race you are, whatever nationality, whatever standards that have either set you up or down, everybody is equal at heart and in mind. So I believe that all men should be given an equal opportunity.”

Ross is heading to Miles College in the fall to join his older brother Jaelin, who will be a senior next year. The importance of learning more about his culture and background are a few of the reasons he chose to attend the Historically Black College and University-designated school over the more traditional bigger colleges. Ross will major in mathematics, a passion that he developed thanks to a math teacher he had as a ninth grader at Lanett High School.

Ross hopes that his list of accomplishments left a legacy and a lasting impact on the Lanett community.

GREATER VALLEY AREA — Another local team will compete on the national level this summer. In its third year of... read more