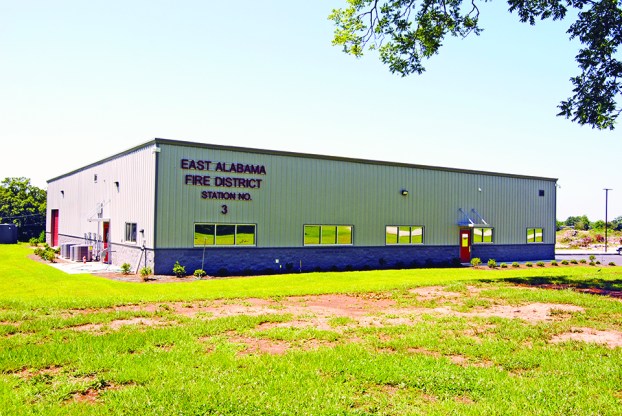 ANOTHER STATION NEEDED? – East Alabama Fire District Station No. 3 recenlty opened in the Fairfax community and significantly improves fire protection for Valleys south side. Is a new station now needed on the north side of Valley? That’s a stated need in an analytical summary that’s part of an ongoing comprehensive plan for the city’s future. An additional fire station in the Shawmut community would well serve those who live on the north end of town, the summary contends.

VALLEY — The City of Valley has been working on a new comprehensive plan for the city since February 2017.

A sixth meeting on this topic took place at Monday’s city council meeting. Ryan Kallem, principal planner for the East Alabama Regional Planning & Development Commission, was present for an update. A number of meetings will be taking place with the city’s planning commission in the coming months. A final proposed plan could be ready for council action by May 2019.

Kallem discussed an analytical summary and some recommendations on Monday. The summary, Kallem said, outlines the top needs determined by each community facility department or organization in the city. The results are based on a facilities survey that was distributed and collected by the planning commission. The needs include:

› A new fire station for the Shawmut community. This is a long-term strategy to serve the citizens on Valley’s northern end. On-duty staffing for the city’s fire and rescue departments could be increased with increased revenue.

› A need for more teachers for Valley High and W.F. Burns Middle School was cited by the summary. “More teachers,” reads the report, “would allow the classrooms to be more manageable and provide more individualized
attention to students excelling in their studies and those who are struggling.”

According to the summary, there’s also a need for stricter code of conduct standards to maintain student discipline, and there’s a need for more parental involvement, including better discipline at home.

There are needs for more funding for summer school, to have air conditioning for the gym at W.F. Burns, to have a covered walkway between Bob Harding-Shawmut Elementary School and the school gym, a bathroom for the annex, and an after-school program for Bob Harding-Shawmut.

A need was cited for more fine arts such as art and music for Fairfax Elementary School. There are also needs, according to the summary, for more technology and more personnel, such as teaching assistants in the lower grades at Fairfax.

Needs for LaFayette Lanier Elementary include a new gym, an intervention teacher and updated security.

The summary looked at parks and recreation needs in the city. Some new playground equipment would be ideal for the Shawmut airport site and for the city park in Langdale.

There could be more activities for active seniors in the city and there could be better service from the Senior Center’s food suppliers.

Kallem said that the city’s water capacity needs are being evaluated through an in-progress study and that the East Alabama Water, Sewer and Fire Protection’s board is negotiating costs, locations and funding for possible future expansions of the sewer system serving the city.

Kallen said that more than a quarter of the city is served by outdated two-inch water lines.

“These neighborhoods would be better served with six-inch lines,” he said. “Two-inch lines are not large enough to adequately serve residential areas. This should be a concern, especially when it comes to fire protection. Plans should be considered to upgrade two-inch lines to six-inch lines in areas with the most need.”

The existing water and sewer lines, he said, could be a problem for future industrial growth.”