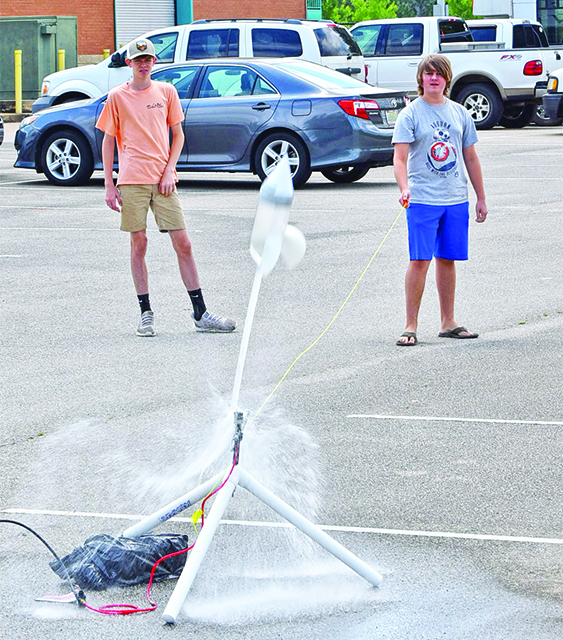 VALLEY — The pressure within the modified two-liter soda bottle built, due to its tubed connection to a bike pump. The bottom of the bottle, replaced with a paper cone, came to a point in order to keep its path straight, a trajectory that was helped along by the makeshift fins glued to the side.

Following a five-second countdown, the cap was ripped off by a string, releasing the pressure and causing the water inside to shoot out. The rocket shot from its holder, careening into the air as the crowd watching shouted “Lift off!”

Day two of Chambers County 4-H’s summer STEM camp at the Valley Sportsplex was in full swing. While the first day had focused on technology and computer programming, Wednesday’s rocket building and subsequent launching placed an emphasis on engineering and the science of flight.

“We have talked about aerodynamics and trajectory,” said Rachel Snoddy, the 4-H regional extension agent for Chambers County. “In one of the challenges they had to aim for a target, so that made them think about proper angles.”

4-H is a national organization that gives young learners hands-on experience in areas like health, science, agriculture and citizenship, and this summer’s three day camp was made possible thanks to a grant to the organization from Google.

The kids attending camp on Wednesday started the day by learning about rockets and how they operate. They then got to work designing and building their own water-propelled rockets using soda bottles, paper plates and packing tape.

4-H Extension Specialist Tony Cook was on-hand to help them with the designs and launches. He spoke on the lessons the kids were learning while they had fun.

“The biggest part of it is having them make something and then see it work,” Cook said. “That’s easy to do with rockets. It’s also the principle behind rockets, seeing how they work. It teaches them Newton’s law, that for every action there’s an equal and opposite reaction and that makes propulsion.”

He also described how 4-H goes about the teaching process by implementing structure into what the kids already want to do.

“We create an environment where they can figure out how to do things better,” Cook said. “There’s
a level of inquiry. When given the basics, they experiment and make it better.”

This was proven during the water rocket launches. Not wanting their rockets to fall victim to the summer breeze, some of the kids added weight to the tip, making for a truer trajectory.

After water rockets, the campers designed solid fuel rockets. They followed instructions to put them together, but were able to add their own flair before shooting them nearly 200 feet high.

The group was all smiles as each rocket took to the sky, with campers looking forward to the final day of camp starting Thursday morning.

VALLEY — More than 50 men gathered on the banks of the Chattahoochee River Tuesday morning to celebrate the 15th... read more