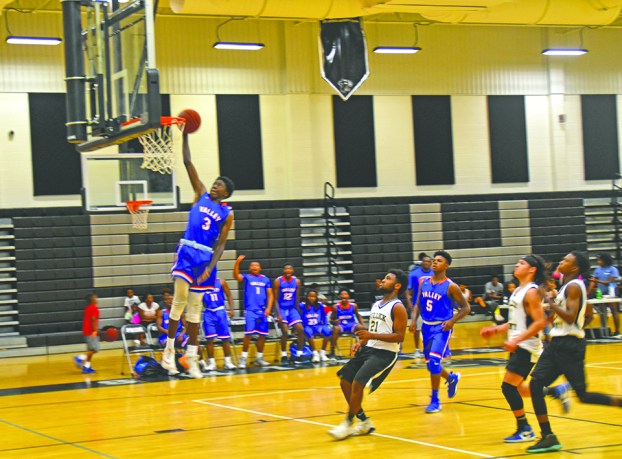 Valley sophomore Jacquez Trammell goes up and attempts a dunk during a scrimmage on Thursday afternoon at Smiths Station High School.

“I’m feeling good, I felt like we came out a little better on defense this time,” Rams head coach Marshon Harper said. “We got out and ran. We rebounded the ball better.”

The team’s two seniors, Davontrez “Trez” Daniel and T.J. Winston, stepped up and led the team in the effort, Harper said.

The Rams played the fast and physical style that Harper previously said he was aiming for coming into summer workouts and the team extended the lead through a plethora of easy buckets on fast break opportunities. In half-court situations, Harper often told the team from the sidelines to move the ball more and the team finished a lot of shots through contact.

“They did a great job of finishing around the basket a little better and I’m just proud of their effort today,” he said. “I think we can improve on set plays. If we can’t get and run, we need to work on our spacing, run our offense to perfection, get better shots than we’re getting. For instance, we’ll take one dribble, with a two-on-one, and shoot the ball, when we can get a layup if we can just run the offense and be a little patient.”

This season’s Rams are replacing seven seniors and with a younger roster, Harper previously said that he planned to put the team through the same workouts that the football team does. Workouts, like flipping tires and doing the agility ladder drills, were examples he gave in order to get the younger players in game shape this season.

Sophomore Jacquez Trammell almost brought the house down with two thunderous dunk attempts during the game, one shortly after tipoff and one towards the end of the second half. Trammell missed both attempts. A hockey substitution by Valley with 3:30 remaining in the second half signaled the victory for the Rams on the afternoon.

VALLEY — In its May meeting, the Board of Directors of The Charter Foundation, Inc. voted to give the Valley... read more