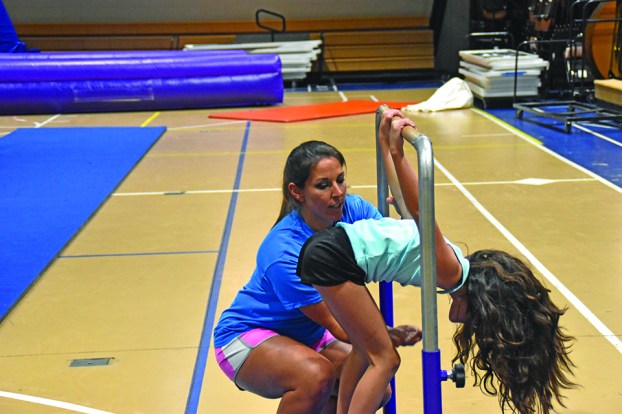 VALLEY— Young athletes around the area can come to the Valley Community Center to become better gymnasts this summer at Top Notch Tumbling as part of its first summer session this week.

“I like the challenge of the sport because you’re not really competing against anybody but yourself,” Top Notch Tumbling owner Chelsea Bunn said. “It’s also very rewarding when you see a girl get a new skill.”

The first session is an intimate session with only 17 girls spanning from pre-k through the fifth grade. From 9 a.m. until noon, the girl’s alternate different stations featuring a balance beam, a kip bar, a drills mat, a floor-tumbling mat and an AirTrack.

Bunn began the Top Notch Tumbling summer camps to the Community Center over five years ago. She personally has 26 years of tumbling experience and 16 years of being a tumbling coach.

Bunn still remembers the first time she threw a back handspring by herself. She was 12 years old in her front lawn when her mother was helping her complete the move. It was in the spring, shortly before cheerleading tryouts.

“It was a mental block. A lot of gymnastics is mental, and you have to overcome that war between yourself when your body can physically do it, but your mind is telling you that you can’t,” Bunn said. “So I finally overcame that mental block, and I can still throw them now at 32 years old.”

Independently throwing the first back handspring is a special moment, in a gymnast’s or cheerleader’s career and Bunn said there’s a particular moment when she still gets that feeling.

“I feel like I share that same feeling with the campers over again,” Bunn said. “So what I experienced at 12, when they get something and they’re doing it by themselves, that rush of emotion comes back over me.”

The first session features three instructors, including Dani Wright, a 2017 Valley High School graduate and former cheerleader. Wright was sporting her bedazzled Valley cheer t-shirt while helping the campers on Tuesday morning. Wright echoed Bunn’s joy in seeing the campers complete a move by themselves for the first time.

“I feel like I get more excited about them getting something that I do for myself,” Wright said. “I get so excited for them to have the feeling that I had when I finally got over my mental block.”

LANETT — Kristian Story is now the No. 1 prospect in the state of Alabama. The Lanett High School quarterback... read more