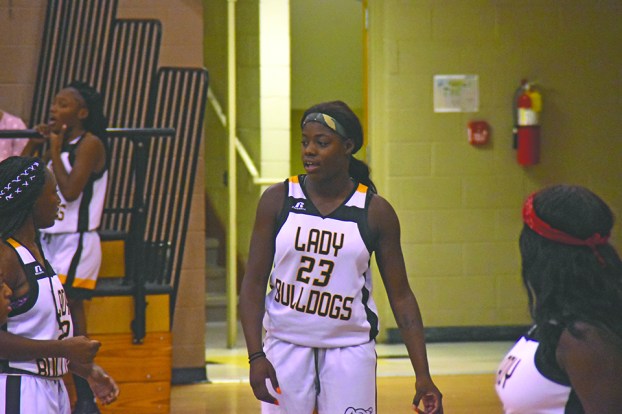 ALL EYES ON HER: LaFayette sophomore Feliah Greer talks to a couple of teammates during Thursday’s Play Date at Beulah High School. last season, Greer was named All-State as a freshman,

Trio of teams from Greater Valley Area play at Beulah

VALLEY — A handful of girls basketball teams from the Greater Valley Area participated in a summer Play Date hosted at Beulah High School.

Lanett, LaFayette and Beulah were all among the featured teams at the Play Date.

Beulah and Smiths Station kicked off the action at 9 a.m. with a low scoring first half. The Bobcats and the Panthers headed into the break with a 9-9 tie.

In the second half, through a series of free throws and jump shots, the Panthers began to pull away from Beulah. The Panthers JV team began cheering loudly for every Smiths Station varsity bucket. The Bobcats were unable to score again until the final two minutes of the game.

“[We] had some fumbles in the second half with the ball,” Milligan said. “We were able to get some good looks but we’ve got to be able to catch the ball. Can’t finish if you can’t catch it so you need to be a receiver first. But I thought we didn’t do too bad, we played pretty good defense on them, didn’t give out too many breakout layups, I think they only had two. They hit a couple of threes on us. We had some silly fouls, fouled a girl twice shooting a three, so that was six points right there but I thought we did alright.”

Beulah ended up losing the game, 24-11. Freshman Myleah Beatty, senior Kensley Taylor and senior Briana Brown were the standout players of the morning, according to Milligan.

The Bulldogs of LaFayette were next up on the court, facing Loachapoka for the third time since Summer Play Dates began. Bulldogs star sophomore Feliah Greer went up against Loachapoka star senior Kaitlin Hill in the matchup.

Greer did it all for LaFayette early in the game, from winning the opening tip off, to distributing the ball, bringing the ball up, rebounding and scoring with ease. Her IQ was higher than most players on the floor with her throughout the duration of the game Greer finished the morning with at least four blocks.

The only thing that could seemingly stop Greer on the court were free throws where the sophomore missed several in the close game.

“We have to start making free throws,” LaFayette head girls basketball coach Michael Bratcher said. “Right now in these summer play Dates, where you’re playing one-for-two, it kills us. We’re missing so many of them. We have to have another person go with Feliah and step up and be a scorer. Our press is working well, we’re getting a lot of transition stuff but we’re not finishing.”

The Bulldogs went into halftime with an 8-4 lead. Greer was the first one back on the court for second half warm ups.

“Come on,” she said to another player holding a ball on the sideline to come join her.

Hill gave Loachapoka its first lead with 9 minutes remaining in the game. The matchup turned into a free throw battle, as both teams got into the paint a majority of their possessions. The LaFayette press worked effectively for the Bulldogs at the right time during the game and LaFayette was able to take the lead back. A LaFayette three-pointer with 1:33 remaining proved to be the dagger.

“We needed a big shot there at the end, and Ebony Williams knocked one down,” Bratcher said. “We were down one or two there with a couple minutes left in the game and they never folded. They kicked that defensive pressure up and they played hard. One thing that nobody will ever say after watching us play is ‘those girls don’t play hard.’”

Lanett took the floor directly after and the game continued throughout the day at Beulah.

VALLEY — The morning sun rose, shining into the eyes of the Valley High School football players when whistles were... read more