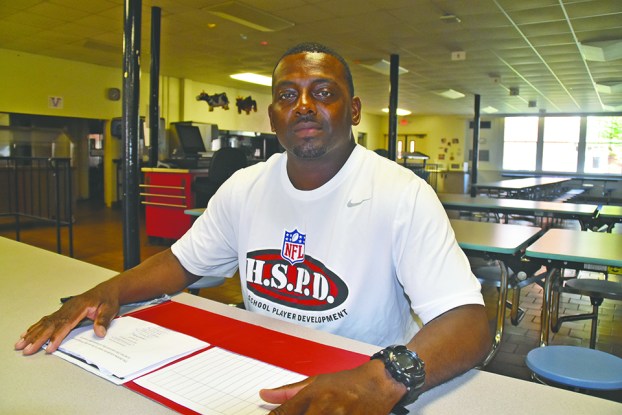 VALLEY — The Valley Rams boys basketball team will have a completely different look next season. After losing seven seniors this year, only four returning players were named on next season’s team roster that was announced on May 25. The new team features four freshmen.

“We’re just going to try to outwork everybody, we’re going to work hard,” Rams boys basketball head coach Marshon Harper said. “Our motto this year, my wife and I put together, is ‘Trust The Process.’ It could either go two ways: It can be a young team that goes out and plays well or it can be a young team where we take some bumps and bruises as ninth and tenth graders, while as eleventh and twelfth graders, we make it to the Sweet 16 or the Final Four.”

Over the summer, the team will work out together four times per week, beginning on Monday.  The workouts will be daily from Monday through Thursday.

Some of the conditioning drills that Harper has in mind include flipping tires, ladders and other agility drills. Harper’s coaching philosophy after 20 years of experience comes down to playing fast and being physical on the floor.

“We’re going to press, we’re going to play man-to-man, we’re going to rebound, when that ball comes off the rim, we’re going down the court,” Harper said. “We’re trying to be a fast team, an up-tempo team. If you can’t run, you won’t be able to hang with us. We’ve been fortunate to have some great teams in the past, but looking now, we have a lot of guards. We don’t have the 6-foot-9, 6-foot-10 kids at Valley High School, so we have to get out and press you, play man-to-man and try to outrun you.”

One of the young members of the varsity squad who can help bring Harper’s speed mentality to the floor is freshman B.J. Baker. In the school’s varsity spring football scrimmage, Baker scored two rushing touchdowns in the 28-6 win over the Beulah Bobcats. The other student-athletes who made the varsity team are Kintavious Dozier, Jay Malone, Jacquez Trammell, Bray Cochran, Justiss Burton, Davontrez Daniel, Raphe Daniel, T.J. Winston, K.D. Hutchinson, Kalen Sherrell and M.J. Atkinson.

LANETT — Jaren Ross was only four years old when his grandmother noticed he was gifted. Before sitting through a... read more