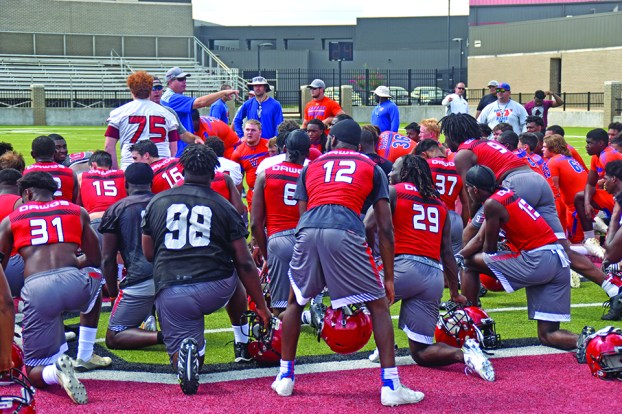 OPELIKA — It wasn’t the preferred form of the game that Valley head football coach Buster Daniel desired to see but on Wednesday the Rams held a joint practice with the Opelika Bulldogs in 7-on-7 style.

“I’m not a 7-on-7 guy,” Daniel said after the practice. “I’m a football coach. I’m an O-Line coach. I want to run the football, [but] this is a necessary evil. We can run routes, the quarterback gets time to read the coverages and make throws.”

The 7-on-7 style practice featured players wearing helmets but with no pads and with minimum contact. There’s a player who plays the role of center, while resembling more of a placeholder during a field goal attempt, before flinging it to the quarterback who typically had more than the usual amount of time before making a throw.

Valley continued to see an equal amount of split reps between quarterbacks Eli Culpepper and Gabe Harmon. The two are currently in a quarterback battle to see who becomes the full-time starter this season.

“Eli and Gabe both made some good throws and some bad decisions so we just have to clean up some things, keep doing what we’re doing and we’re going to be fine,” Daniel said. “They’re both doing well. We’re going to go through the summer and make a decision at the end.”

The air attack is something that the Rams still want to improve on regardless of who the starter is, he added.

Both offenses were put into short field situations throughout the morning. The teams started from the 40, began situational plays like third and nine, before finishing the day with plays in the red zone.

Valley’s defense grabbed an interception in one red zone play but there was a host of impressive one-handed end zone grabs made by both offenses throughout the morning. The Rams had a brief moment of humor when a teammate was wiped out on the sideline after crashing into an Opelika player trying to slow himself down after a play.

“That right there was game speed,” Daniel said. “That’s exactly what it was. Sometimes when you get to practice, it gets old and guys go half speed. That’s full speed right there. That’s what we need.”

The Rams will continue summer workouts before getting a quick break next week for the fourth of July.

VALLEY— Young athletes around the area can come to the Valley Community Center to become better gymnasts this summer at... read more