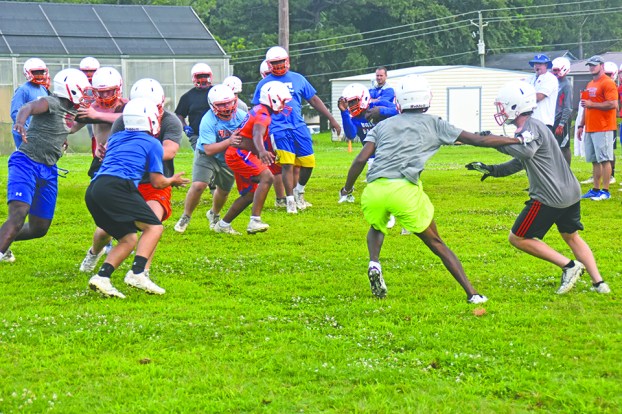 IN THE TRENCHES: A Valley running back takse a handoff during Thursday’s non-contact workout. Photo by Rashad Milligan

VALLEY — The morning sun rose, shining into the eyes of the Valley High School football players when whistles were blown signaling the start of another drill during summer workouts on the school’s campus.

The Rams have worked out every Monday through Thursday morning from 6:45 a.m. to 9:30 a.m. for the last two weeks.

“Both weeks have been really, really good,” Valley head football coach Buster Daniel said. “You can see the attitude changes of a kid. We’ve been getting after it and they haven’t backed down for one ounce. They’re really working hard and I’m extremely proud of them.”

Players walked around the field with bags under their eyes during the early morning workout on Thursday. Daniel advised the players to make sure they get the necessary amount of rest to show effective results during workouts.

Coaches from other sports at the school were also on the sideline, serving their duties as football assistants and observers. Head boys basketball coach Marshon Harper and baseball head coach Patrick Shivers were on the field while B-team boys basketball head coach Mike Power was directing the JV football players in a series of drills involving running.

Daniel said that, so far, he’s been most impressed by the Rams’ effort during workouts. Toward the end of Thursday’s workout, Valley ran through simulations of plays with only helmets on and no tackling allowed. Full-padded and contact practices aren’t allowed until dates closer to fall. Daniel said the restriction is a good thing this season for the team.

Freshman running back B.J. Baker turned a few heads in this year’s spring game where he ran for two touchdowns. Baker continued to stand out during Thursday’s workout by finishing first in his group running the length of the field for most of the morning.

“B.J.’s got some things to work on,” Daniel said. “His biggest thing is to grow up a little bit and become a varsity football player. He’s still got a little bit of the junior high mentality in him but we’re working on that. He’s a good kid and he’s working hard when he’s here.”

On June 26, Valley heads to Harris County for a 7-on-7 matchup. The Rams will have four or five this summer.

LaGRANGE — The Valley High School boys basketball team were shut out and went 0-3 at Thursday’s Play Date at... read more