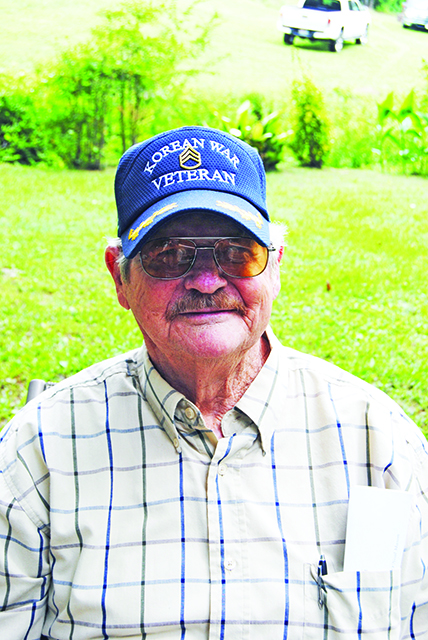 VALLEY – Lifelong Valley resident Charles Hall is a man who has led the good life.

Hall lives a short distance away from the house he grew up in in the Shawmut community. He’s now in his nineties and is one of the few living people who went to school in the original Shawmut High School building that sat on Shawmut Circle. He was in the elementary grades when the school closed with the consolidation with Valley High in 1939.

Hall worked at Shawmut Mill for most of his adult life and retired during the Farley disaster of the late 1980s.

The only time he was away from Shawmut for an extended period was during his military service. He was with 3rd Army, 25th Engineers, for two years during the Korean War. For honorable service to our country during war time, Mr. Hall has been named our Valley Times-News “Veteran of the Week.”

After basic training at Fort Lee, Va., Hall was sent to Korea in 1952 and was in the Pusan area until his enlistment ended in 1954.

“It was such an awful war,” he said. “I will never forget some of the things I saw. The worst thing was the way the Korean people had to live. They had no homes to go to and had to sleep on the hard ground. I hated seeing anyone having to live that way.”

Most of them had to beg or forage for whatever food they could find.

Hall worked at a depot where all kinds of maps of the Korean peninsula were kept.

Hall came back home to Shawmut in 1954. The next year he married the love of his live, Glenella. They’ve now been married for 63 years. They have two daughters, seven grandchildren and two great grandchildren.

“Our son Randy died 11 years ago,” he said. “Our daughters, Sheena Siggers and Wendy Knight, live in Tennessee.”

“It’s been a good thing,” he says of the prayer group. “It’s good to offer prayers to those in need.”