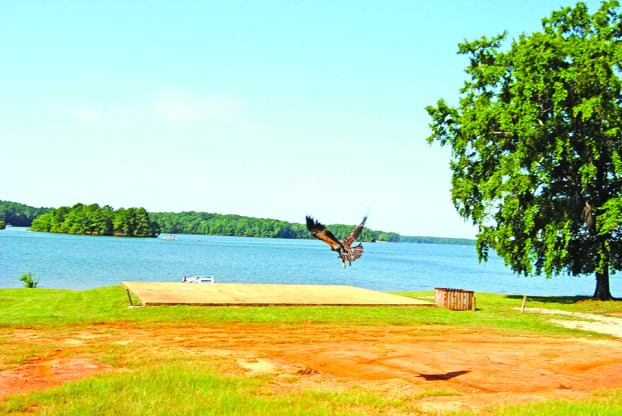 PYNE, Ga. — A crowd of approximately 50 people was on hand Saturday morning at Pyne Road Park to witness a bald eagle being released on West Point Lake.

The eagle release took place as a cooperative effort on the part of the Georgia Department of Natural Resources and the Auburn University Raptor Center. The release took place at the boat ramp on the south end of the park. Shortly before the release, a harness carrying a satellite tracking device was attached to the eagle’s leg. If it remains in place, the eagle’s movements can be tracked for some time.

Bob Sargent, a wildlife biologist with the Georgia DNR, headed up Saturday’s release. He said that he takes part in three or four such releases each year in Georgia. About a year-and-a-half ago, a similar release took place on the Clark Hill Reservoir on the Georgia-South Carolina line. The eagle that was released has been tracked all the way to Hudson Bay, Canada.

“We’re hopeful he will find his way back south this winter,” Sargent told the crowd. “We think there’s a good chance he will return to where he was released at the Clark Hill Reservoir.”

The eagle that was released Saturday started winging his way south in the direction of West Point Dam when attacked in mid-aid by another eagle. It was a way of playing tag and getting across the message that “this is my territory and show me some respect.”

The young raptor looked more like a golden eagle than a bald one. Sargent explained that all young eagles look this way. It’s not until they mature at four or five years of age that they develop the distinctive white head and tail.

The eagle was born in Thomas County, Ga. near the Florida line. When it was only one week old or so it fell out of its nest and was discovered on the ground by a law enforcement officer. He checked around to find out if anyone could raise it to adulthood. This led him to the AU Raptor Center, which took him in and raised him until he could be on his own. The crowd that watched him fly off Saturday could attest that the eagle is mature enough to be on his own.

Most young eagles don’t make it.

“Research shows that 50 to 7o percent of them die,” said Sargent. “Sometimes they get attacked by adults. One of the main reasons they get killed is that they get hit by cars.”

Like other raptors, they are attracted to road kill. Eagles are great flyers but are awkward in getting off the ground and readily getting out of the way of danger.

Even with that high mortality rate, eagles have made a big comeback in the U.S. since the 1970s, when they were heading to extinction.

“In the 1970s there were no known nests in the state of Georgia and only between 400 and 500 in the United States outside Alaska,” Sargent said.

In the years following World War II to the 1960s, eagles and other animal species were disappearing at an alarming rate. Research pointed to a pesticide known as DDT as the main culprit. Eagles and other endangered species have made a big comeback since DDT was banned in the U.S. by the Endangered Species Act of 1973.

Despite the bald eagle being a beloved symbol of the U.S., there have been periods in our history when the bird was seen as a nuisance.

“At one time in Alaska, bounties were placed on them. In a 35-year period, 128,000 of them were hunted, trapped or poisoned,” Sargent said.

Another factor in the decline of eagles was the depletion of old growth forests.

“Eagles need old pine trees to live in,” said Sargent. “As these forests were cleared for timber, they lost their habitat.”

In spite of those setbacks, the bald eagle population is now on the upswing in the U.S.

“At last count, we had at least 218 nests in Georgia,” Sargent said.

Since 1995, the bald eagle has been removed from endangered species list and is now considered a threatened species.

One of those nests was found on the ground on Cabbage Island off the Georgia coast. It had been built that way by a nesting pair of eagles.

Bald eagles like to live near large bodies of water. They like to live in old trees and to feed off fish. They are deft at swooping down and snatching small fish from the water with their talons. People who spend a lot of time on West Point Lake have probably seen this. Ospreys are noted for this as well, and they are quite numerous on the lake.

Sargent invites people to go to georgiawildlife.com to find more information about bald eagles and other wildlife in the state.

He thanks state residents for supporting wildlife though vehicle tag purchases.

He said that 60 percent of the funding for the satellite tracking program came from these sales.

“Unless the harness falls off or is pulled off by the eagle, we can follow them until they die,” he said.